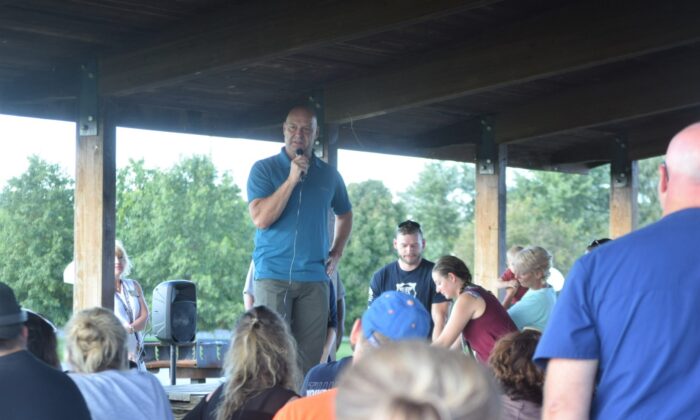 State Sen. Doug Mastriano addresses a crowd of around 350 people worried about losing their jobs due to a COVID-19 vaccination requirement in Fayetteville, Pa., on Oct. 4, 2021. (Beth Brelje/ The Epoch Times)
Regional News

FAYETTEVILLE, Pa.—Brandon Adkins wore his “Hero” t-shirt to an off-campus gathering of Wellspan Health workers who are eager to find a compromise to the impossible choice: get vaccinated or get fired.

Not long ago, before the vaccine was developed, when more people were dying and the way COVID-19 spreads was less understood, healthcare workers like Adkins were called heroes for showing up to work despite the risks. They didn’t get raises, shorter or better hours, or certainty that they wouldn’t get sick or die; but some got t-shirts.

Now they are being villainized for refusing to get vaccinated. Some 350 people, mostly Wellspan Health workers, gathered Monday under a pavilion at Norlo Park in Fayetteville, Pennsylvania, to organize and communicate as a group to find a way around President Joe Biden’s vaccine mandate requiring vaccination or termination for health care workers and those who work for any company with more than 100 employees.

Some attendees brought children. Many wore scrubs straight from work. Most didn’t want their photo taken because they feared just attending the meeting could make things uncomfortable at work or even jeopardize their job before they commit to a decision. There were surgeons, nurses, dieticians, secretaries, and workers from most departments.

The workplace has been splintered into a new social hierarchy separating those who are strongly pro-vaccine, those who never intend to get vaccinated, and others who don’t want the vaccine but need to hold on to their job.

Wellspan operates hospitals in York, Gettysburg, Lebanon, Ephrata, Waynesboro, and Chambersburg. It is one of the many operators across the nation being wedged by the federal government into the position of enforcing unprecedented demands on workers. The company did not respond to requests for comment for this story.

“For the past year and a half, company policy was, you could still come to work if you were COVID positive but not symptomatic,” Adkins, 35, told The Epoch Times. “Now they’ve canceled the swabbing policy and vaccines are mandatory. You have until Dec. 1 to get vaccinated, or you get a 7-day suspension. If you’re not vaccinated after 7 days, you are terminated.”

That is the deadline for workers. Managers must get vaccinated by Nov. 1.

He lists multiple reasons for skipping the vaccine, including medical, religious, and a moral and ethical dilemma.

“I’m very American about it. You have the freedom to choose. If you want your vaccine, by all means, get it. It’s readily available. If you get COVID, get sick, I’ll still take care of you. There shouldn’t be a guilt trip around it,” Adkins said. “Many workers don’t want to get it but are feeling bullied in order to keep their livelihood. What’s next? Where do we have a hard stop? If you are bullied and forced to do something now, you can be bullied and forced to do something else.”

“I will be turning in my religious exemption but there is a real possibility it will be denied,” Adkins said. “I’m a capable person. I’ve done construction and stonework. I’m not fearful for my income. But not everyone is in my situation. For many of my coworkers, medicine is all they’ve known, and all they’re comfortable with. It’s frustrating to see them being bullied and blackmailed about their job. I don’t appreciate it and I will not be giving in.”

“The federal and state government is drunk with power. There is no reason why you should have these things compelled upon you,” Mastriano said to the gathering. “You know better than I do, it’s not about the vaccines and it’s not about the masks, it’s about your freedom of choice. All I care about is, you determine what goes into your body.”

He urged them to stand together and to consider a class-action lawsuit.

“This is no joke. This is a struggle for your livelihood, your family, your income, your stability, your future. Governor Wolf and President Biden made your future uncertain because of these edicts. I know this is a hard choice,” Mastriano said. “We don’t know the outcome. This is your choice. But the odds are better if you stand together.”

They’re going try to pick you off one by one, Kaufman said, as he also urged those gathered to work together.

He pledged they would do what they could to support the choices workers make.

The lawmakers talked about several bills that are stalled in committee, including House Bill 262, the Right to Refuse Bill. It would allow an employee or prospective employee to refuse to participate in a medical test or injection required by an employer.

Senate Bill 471 would prohibit the state from mandating vaccinations. And Senate Bill 885 would allow workers who lose their jobs for refusing the COVID-19 vaccination to get unemployment compensation.

But the decision of whether submit to the vaccine mandate still comes down to personal choice.

Tabiatha Carbaugh, from Shippensburg, Pennsylvania, has a lot to lose if she and her husband don’t get vaccinated soon; both their jobs will go first, and if they can’t make up that income, they will lose their car and house.

“I would never get the vaccine,” Carbaugh, 43, told The Epoch Times at the gathering. “I don’t know anyone who has died from COVID, but I know of three who died from the shot.” She figures she can lose her job or take the shot and possibly get sick or die, in which case she wouldn’t be contributing to her family’s income.

“I’m not good to anyone if I’m dead or injured,” said Carbaugh. “I’m angry. This could completely uproot my life. I just have an instinct feeling the vaccine is not going to be good for me.”

She doesn’t work for Wellspan but was one of many who heard about the gathering and attended to learn more. As a mental health case manager, she goes into clients’ homes and says she experiences symptoms when she is around people who have been vaccinated.

At work, each case manager is supposed to be maxed out at a case load of 30 patients, but she and her coworkers are currently handling 35 patients each. She is not alone in her intention to skip the vaccine and she wonders how her workplace will handle the caseload when so many skilled workers are forced to leave.

She hopes to get a job as a waitress or with a DoorDash type service when she loses her job. She expects to work several jobs to earn enough to get by.

Nurse Tom Ross, 61, of Waterfall, Pennsylvania, is vaccinated, but his wife, also a nurse who had COVID-19, is not sure a vaccination is best for her. They both work at Chambersburg hospital. She wants to make a choice based on her individual medical needs, which is how it should be, Ross said.

Many healthcare workers are in the same situation, having recovered from COVID, they believe the antibodies from the sickness are as good, if not better than the antibodies a vaccine produces.

Ross is troubled by the lack of personal choice in the matter.

“I spent 21 years in the Navy to protect our freedom, and this isn’t it,” Ross told The Epoch Times.