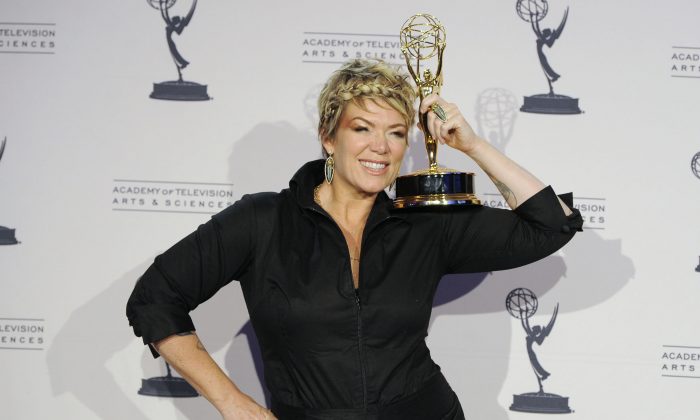 FILE - In this Aug. 21, 2010 file photo, Mia Michaels poses with the award for outstanding choreography for "So You Think You Can Dance" in the press room at the Creative Arts Emmy Awards in Los Angeles. (AP Photo/Chris Pizzello, File)
Entertainment

Looking for Broadway’s Next Star? Turn on Your TV

NEW YORK — There are plenty of places that get young people ready for Broadway — Juilliard, Carnegie Mellon, Yale and New York University. But don’t forget “So You Think You Can Dance.”

The Fox TV show, which just concluded its 12th season, has turned into a reliable springboard for scores of Broadway dancers, helping performers land in everything from “The King and I” to “Hamilton.”

“I can’t say enough about how much I learned on the show, how many connections I made on the show and how I needed it as a performer and as an artist,” said Melanie Moore, the Season 8 winner who went on be Peter Pan in “Finding Neverland” and next has a featured part in “Fiddler on the Roof.”

Alumni who have made a mark on Broadway include Ricky Ubeda in “On the Town,” Virgil Gadson in “After Midnight,” Cole Horibe and Alex Wong in “The King and I,” and Thayne Jasperson and Neil Haskell in “Hamilton.” The recent ensemble of “Newsies” was studded with former “So You Think” dancers.

Contestants who endure the 10-week TV boot camp on “So You Think You Can Dance” must learn to adapt to new partners and unfamiliar dance styles, all under the gaze of live cameras and judges. It’s no wonder that Broadway comes knocking.

“I hire ‘So You Think’ alum whenever I can,” said Broadway choreographer Spencer Liff, whose credits include the new “Spring Awakening” on Broadway and Neil Patrick Harris’ TV show “Best Time Ever.”

“A huge reason why is they are in the most high-pressure situation you can ever be in. The ones that can cut it and survive in that world, I know that I can trust them to put them on a stage.”

Moore, so strong on the TV show that she was nicknamed the “Beast,” was 19 when she competed. It was the Georgia native’s first big performing experience, and she mastered everything from Latin jazz to hip-hop.

“I developed this love of performing in front of a live, completely juiced-up audience,” she said. After moving to Los Angeles and working on “Glee,” she craved a new challenge. “With a live audience, the stakes are always so high.”

These days, looking for “SYTYCD” credits in Playbills has replaced scanning for “Law & Order” mentions. But it’s not just the dancers who are making the leap — choreographers on “So You Think You Can Dance” are also enjoying higher recognition and a fan base.

Some prominent choreographers who straddle both worlds include Liff, Warren Carlyle, Joshua Bergasse and Mia Michaels, who made her Broadway debut last season creating “Finding Neverland.”

When it came time to replace Moore as Peter Pan, Michaels had a special dancer in mind. Naturally it was someone from “So You Think You Can Dance” — Amy Yakima.

Yakima, 21, the Season 10 winner from Michigan, dreamed of one day being on Broadway but not so early in her career. She was a natural choice to replace Moore since both women share a muscular style, an eagerness to learn and an ability to sing.

“She’s one of my idols so it’s kind of crazy to fill her shoes,” Yakima said of Moore, who helped her learn the role. “As scared as I was, she made it a little bit better.”

Hiring “So You Think You Can Dance” graduates also helps the box office of Broadway shows since fans of the TV show will check out their dancing heroes onstage.

“I think that’s why Broadway is hiring them now. Melanie Moore and Amy Yakima — they have their own fan bases. They’re selling tickets,” said Liff.

“So what normally (would) be just an ensemble dancer in a Broadway show is actually somebody that can bring people into the house. That’s a new phenomenon.”

Show alumni who end up in New York say they all keep in touch, bonded by what Moore calls a “crazy, harrowing” experience: “No matter what season you’re on, you all understand the other person has been through this thing.”

Michaels understands more than most. She challenges the TV contestants with tricky choreography set on park benches or about addiction and now reaps the reward by hiring them for the stage.