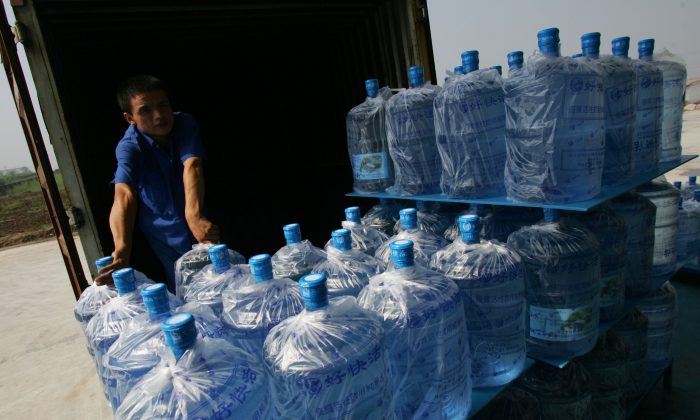 A worker loads bottled drinking water onto a van at a bottling factory July 22, 2007 in Xian of Shaanxi Province, China. One sixth of the 650,000 filtered water bottles sold in Beijing daily contain water from the tap, according to Beijing Association for Barreled Drinking Water. (China Photos/Getty Images)
China

Beijing residents consume vast quantities of bottled water on a daily basis to escape the Chinese capital’s pollutant-and-germ-infested tap. But it’s a wet Russian roulette, according to Chinese reports, since it turns out that one-sixth of that supposedly clean water is actually taken from the same tap Beijingers wanted to avoid in the first place.

Statistics from the Beijing Association for Barreled Drinking Water give a total of around 10,000 businesses selling filtered water in the city, of which only 50 to 60 percent are regulated. The association said that nearly 5,000 shops sell unfiltered or partially unfiltered water.

Of 650,000 filtered water containers sold in Beijing daily, the association estimates that one- sixth contain water from the tap.

A typical establishment is the Yongkang Water Delivery Service Center, which, like many other such shops, is located in a small Beijing alley. A report by Beijing Evening News described dozens of water barrels “casually piled up” in the shop along with produce, packaging boxes, and miscellaneous goods.

The water containers at the Yongkang center were plastered with labels reading “High quality drinking water.”

These stickers are a good sign that the water is actually tap, said Mr. Lang, who heads the market supervision office at the Beijing Association for Barreled Drinking Water.

“Labels that don’t specify the factory name or brand are all fakes made by small workshops. Those small workshops don’t have the ability to make filtered drinking water, let alone ensure quality or safety. Some of them directly fill the barrels with tap water,” Lang told Beijing Evening News.

Yongkang also makes use of fake brands by putting their labels on the barrels. The reporter found water barrels labeled with seven different brands, such as Robust, Wahaha, and Yanjing.

The owner of the Yongkang center told a reporter that he sells water to tea shops for six yuan ($1) a barrel, while each container only costs 2.3 yuan (about 40 cents).

“The tea shops don’t want good water. They all want this kind of water. They can’t afford good water to make tea for customers,” the owner said.

Yongkang also sells genuine filtered water, for 18 yuan a container. But this is a rather low price, made possible by the fact that it is often mixed with tap water, a woman working at Yongkang told Beijing Evening News.

“Many water shops mix real water and fake water for sale. They vary in the proportion of real and fake water,” a former shop owner told Beijing Evening News. He said that the water stations usually deliver filtered water to new customers, and then switch it with tap water after the clients have been conditioned.

The Beijing Association for Barreled Drinking Water has always faced the issue of how to supervise and punish water stations that sell tap water as bottled water. Mr. Lang said, “As the industry association, we can only supervise it. We went to visit the workshops today, and they will continue to sell fake water tomorrow.”

The Beijing Evening News reporter recounted the water issue to both the Beijing Administration of Industry and Commerce (BAIC) and Beijing Food and Drug Administration, but received no immediate response for an investigation. BAIC staff replied that it can only start an investigation when a trademark holder reports that their brands have been counterfeited.

“We see so much unfiltered water being sold, but can’t do anything. We can only rely on the industry to discipline itself.” Lang said.