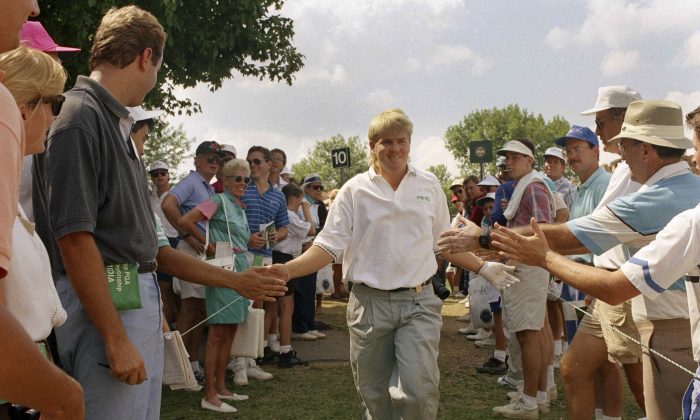 John Daly of Memphis, Tenn., is greeted by spectators on his way to the tenth tee during final round action of the PGA Championship in Carmel, Indiana on Sunday, August 11, 1991. (AP Photo/Ron Heflin)
Golf

Looking Back: John Daly’s Epic Win at the 1991 PGA Championship

The rags-to-riches story is a profound one. Seeing someone emerge on the professional sports scene and then catapult themselves to the top of the competitive pyramid is something to behold. Twenty-five years ago, a golf episode took place that even Hollywood script writers could never have imagined. For professional golfer John Daly, his story is one that will forever be remembered.

The 1991 PGA Championship was held at Crooked Stick Golf Club—just outside of Indianapolis—and was the first broadcast by CBS Sports after a longtime network affiliation with ABC Sports. One of the competitors in the event was tour star Nick Price. Prior to the start of the competition, Price announced he was pulling out in order to be with his wife who was pregnant and likely expecting at any moment.

Daly’s emergence only came about because eight other alternates were not able to get to the site in time for the event. The 25-year-old drove from his home in Memphis and—without the benefit of a practice round—entered the field. One of the interesting dimensions of Daly’s participation was hiring Price’s regular tour caddie—Jeff “Squeaky” Medlin. Known for his high-pitched voice, Medlin guided Daly around Crooked Stick and simply instructed Daly to “grip it and rip it” with each tee shot.

Daly’s prior professional golf involvement was in playing the Ben Hogan Tour—a collection of golfers seeking to finally break through and achieve PGA Tour playing privileges. During his time on that circuit, the prodigious lengths Daly could hit a golf ball became well-known to many in professional golf.

At Crooked Stick, Daly opened with a surprising 69 and took the 36-hole lead with an even better 67. The final 36 holes saw Daly continue his power-producing drives in combination with a delicate putting stroke. In the end, Daly would take home the Wanamaker Trophy with a three-stroke win and eventually be named the Tour’s Rookie of the Year. Daly’s victory at Crooked Stick also made him the first rookie to win a major championship since Jerry Pate did likewise at the U.S. Open in 1976.

The ascension of Daly became an instant crowd pleaser and garnered much interest for the golfer hailing from Dardanelle, Arkansas. The professional golf scene was evolving and adjusting to a new era of developing stars. Daly was far from being your typical well-coiffed robotic golfer. His style engendered crowd appeal given his style of play, which often featured aggressive lines of attack—even when situations called for more prudent plays.

Daly’s style—both on and off course—did not often sit well with his fellow professionals. John’s rise spoke about the nomadic lifestyle that lies at the heart of professional golf. Daly was embraced by golf fans because his persona was far removed from the expressionless players who were becoming more and more of the norm on the PGA Tour.

“Long John” enhanced his reputation just two years later at the 1993 U.S. Open at Baltusrol, reaching the so-called unreachable par-5 17th on the Lower Course with just a drive and 1-iron—becoming the first golfer to do so in competition. Many wondered whether Daly’s win at Crooked Stick was nothing more than a one-time thing. In 1995, Daly added his second major championship at the renowned Old Course at St. Andrews, winning a three-hole aggregate playoff over Italian Constantino Rocca.

Even with his second major title, Daly was not selected to the American Ryder Cup team that year, and the feeling was that John’s “style” did not mesh with the established golf order. Daly did not endear himself to golf insiders when saying a number of PGA Tour players were cocaine users and that if proper testing were done he would be seen as one of the cleanest players.

With his immense talent, the pressures for Daly to add other golf titles took its toll. Off-course situations became the more common news items about him. Daly went through several marriages and had sustained bouts of alcoholism and rampant gambling leading to mood swings. Daly claimed his connection to alcoholism came from an abusive and alcoholic father.

Throughout his prime playing years, Daly would go through various situations of club-tossing, sometimes hitting shots in rapid succession and then withdrawing quickly. The immense talents Daly possessed were far more than just hitting powerful long tee shots. But, as the expression goes, time and tide wait for no man.

Daly did win five times on the PGA Tour, and his return to Baltusrol this week for the PGA Championship reopens a moment in time when he captured the public’s attention in hitting shots only he was capable of producing.

Daly is now competing full time on the Champions Tour after turning 50 this year. It’s easy to spot him on the grounds at any tournament—one just needs to look for the golfer in the colorful Loudmouth apparel he wears, featuring multicolor pants and shirts.

Still, golf fans are quick to recognize and salute what Daly provided to golf. His skills and talents could have indeed been far more than what he ultimately produced. Daly’s arrival 25 years ago produced a PGA Championship victory that will forever live in golf annals. It’s just too bad his contributions to the game could not have been so much more without all the unnecessary distractions and detours through life. Daly now has one final opportunity on the Champions Tour to show what he can with his golf clubs—one can only hope John seizes that moment.