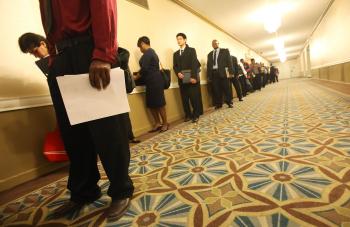 Job seekers line up to attend the Diversity Job Fair at the Hotel Pennsylvania September 29, 2010 in New York City. More than 600 applicants were expected to attend as unemployment remains high throughout the country. (Mario Tama/Getty Images)
Business & Economy

Looking at Jobs and Undocumented Workers in the US

Heide B. Malhotra
View profile
Follow
biggersmaller
Print
Receiving a pink slip and joining the unemployment lines is the dread of many workers during these tough economic times in the U.S.

Jobs are scarce and American companies, flush with cash, prefer to invest their funds outside of American borders, according to a recent report from Treasury Strategies Inc.

However, less people were laid off in September than the prior month, and for the week ending Oct. 2, about 3,000 less people applied for unemployment insurance when compared to the prior week, according to a U.S. Labor Department report.

“Some people are still jobless when their benefits run out, and many more are not eligible at all or delay or never apply for benefits. So, quite clearly, UI [unemployment insurance] information cannot be used as a source for complete information on the number of unemployed,” qualified the U.S. Bureau of Labor Statistics (BLS) regarding its monthly statistics on its website.

The United States has 6.1 million people who have dropped off the unemployment insurance list because they maxed out and were no longer qualified to receive government assistance. Besides, there are about 1.2 million workers who have stopped looking for a job because they no longer have confidence in the U.S. economy, according to the BLS. These people were also not counted.

The September U.S. unemployment rate of 9.6 percent, reported on Oct. 8 by the BLS, has been held almost flat since the beginning of this year, moving up and down a smidgen.

Among others, the federal government took 159,000 off its payroll, though 77,000 people were hired for Census 2010 and did expect to lose their job around this time. The remainder were let go by local governments.

About 64,000 U.S. jobs were filled in September, which is a small amount, considering the number of unemployed people.

State governments are in charge of the unemployment insurance, which is funded by federal and state governments, as well as corporations in any given state.

Putting People Back to Work

“There are 15 million unemployed workers in America and eight million illegal immigrants in the labor force. We could cut unemployment in half simply by reclaiming the jobs taken by illegal workers,” said Rep. Lamar S. Smith, R-Texas, in a mid-2010 press release from Rep. Sue Myrick, R-N.C.

Smith, Myrick, and Rep. Gary Miller, R-Calif., formed the “Reclaim American Jobs Caucus” in the first quarter of 2010 to reclaim jobs held by illegal immigrants. Membership has reached 41, with all members being state representatives and mostly Republican.

“In my home state of California, there are 2.2 million unemployed but 1.8 million illegal
immigrants in the labor force,” Miller said in an announcement about the Caucus, published on the NumbersUSA website.

Besides illegal immigration, the Caucus also addressed the H-1B Foreign Worker Programs, which brought into the United States workers from India, China, and other countries, putting educated and experienced Americans out of work.

“According to the Department of Labor’s 2006 Strategic Plan, ‘H-1B workers may be hired even when a qualified U.S. worker wants the job, and a U.S. worker can be displaced from the job in favor of the foreign worker,’” according to an article on the NumbersUSA website.

In 2009, there were 10.8 million illegal immigrants in the United States, according to the Department of Homeland Security, with more than 60 percent from Mexico. At the same time, the U.S. government allowed 125,000 foreign workers to come to America on the H-1B Foreign Worker Programs during 2009, while there were millions of unemployed Americans, the Caucus claims.

“The unemployment rate for unauthorized immigrants of all ages in March 2009 was higher than that of U.S.-born workers or legal immigrants-10.4%, 9.2% and 9.1%, respectively,” according to a recent article on the PewResearch website.

“Lately, we have been hearing a lot from those who attempt to perpetuate the myth that illegal immigrants are only doing jobs that U.S. citizens won’t do,” according to a recent article on the Bakersfield Californian website.

Employers are hiding the fact that they hire foreign workers without legal documentation, jobs that could help reduce America’s unemployment lines. A number of studies by universities and employment experts have found that the reason why Americans can’t get certain jobs is because companies get away with paying below poverty level wages to people that are in the U.S. illegally and who won’t file complaints in any court.

Also, undocumented workers are not only employed in the agricultural industry, but have been making inroads in jobs held by painters, roofers, plumbers, and electricians—jobs that once were held by America’s working class, of whom many are now unemployed, critics say.

After a raid on Crider Inc. by the U.S. Immigration and Customs Enforcement (ICE), around 75 percent of workers were found to be illegal Hispanic workers. The company had to replace them with low-skilled workers. At the same time, wages went up by about $1, and around 200 U.S. citizens went back to work.