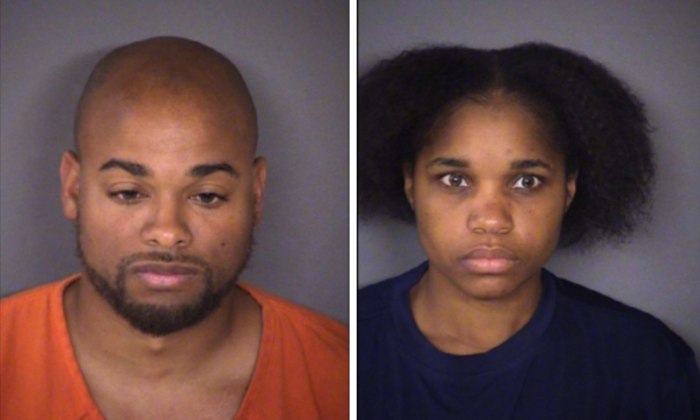 Alphonso McCloud (L) and his wife, Stanyelle Miles-McCloud (R), the owners of a dog that severely disfigured a 73-year-old San Antonio woman were found guilty on Jan. 22 of causing serious bodily harm, a felony. (San Antonio Police)
Crime and Incidents

‘Look at me’ Shouts Woman at Dog Owners After Horror Mauling

An elderly San Antonio woman whose arm was ripped off and her face disfigured by a pit bull told the dog’s owners during their sentencing on Monday, Jan. 23, that the attack will haunt her for the rest of her life.

“As a Christian, I have to forgive you, but tell me, how can I forget?” 73-year-old Doris Mixon Smith said, according to MySanAntonio.com. “I can no longer tie shoes, fasten my earrings, or dress myself.”

Woman, 73, who lost an arm and was disfigured by a couple's pit bull named Bully screams at 'arrogant' dog owners after they are found guilty in horror mauling
https://t.co/fMg0TsR1F3

The jury sentenced McCloud to four years in prison and his wife to 10 years of probation for the horrific dog attack, which took place in March 2017.

Smith delivered a stirring victim impact statement after the sentencing.

Smith accused McCloud, a U.S. Army veteran, of showing no remorse for the vicious attack.

McCloud said that he has been unfairly portrayed on social media and in the news as a “bad guy.”

“I’ve been blown up for my country,” McCloud said, in an apparent reference to his time in the army. “I am not a criminal.”

District Judge Joey Contreras used strong words in reference to the attitude exhibited by the defendants.

“The arrogance of the defendants is mind-boggling,” the judge told the court. “Today, they defended a breed that ripped a woman’s arm off in front of their son!”

Contreras raised the defendants’ bond amounts to $250,000 each and ordered them remanded to jail after prosecutors revealed that on the morning of the sentencing, two other pit bulls were photographed in the McClouds’ yard, in violation of an earlier court order.

Earlier in the trial, jurors wept as they viewed a brief three-part video entered into evidence by the prosecution, it was reported.

The footage showed parts of the attack, in which the stocky animal tore Smith’s arm out of its socket and ripped the skin on the right side of her face from eyebrow to chin.

“Let go! Let go!” the defendants’ 10-year-old son could be seen shouting in the video, crying as he used a stick to try to stop the 70-pound pit bull, named “Bully.” The dog continued its relentless attack on the elderly woman until the police arrived.

Only after officers shot the dog three times did the gruesome assault conclude. Smith the boy a hero for trying to defend her.

According to MySanAntonio.com, in fiscal year 2017, there were 15 dangerous dog attacks in San Antonio that required hospitalization for serious bodily injury.

A dangerous dog attack causing severe bodily injury is a felony punishable by two to 10 years in prison for owners and a fine of up to $10,000.