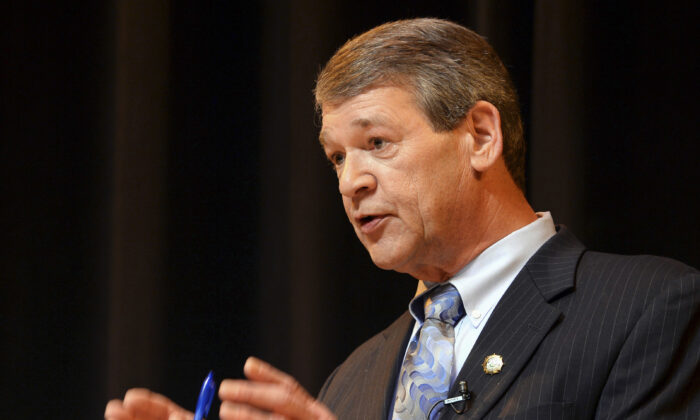 North Dakota Attorney General Wayne Stenehjem speaks at an event in Bismarck, N.D., in a file image. (Will Kincaid/The Bismarck Tribune via AP)
US News

Attorney General Wayne Stenehjem, a Republican, “passed away unexpectedly” at age 68, his office said in a statement.

Reached on Saturday, a spokeswoman said the office had no further information to share at this time.

“We know Wayne was a widely respected and well-known public figure, but we ask that his family be allowed time to grieve in private,” the office said.

The brother of Stenehjem, who had been in office since 2000, told KFYR that the attorney general fell on Friday morning and was rushed to a hospital in an ambulance.

Allan Stenehjem, the brother, said his sibling had an ulcer. Inflammation from the ulcer may have caused the fall, Allan Stenehjem said.

Allan Stenehjem told the Bismarck Tribune that his brother didn’t have any serious health issues and that the death wasn’t related to COVID-19.

The attorney general in December 2021 said he wouldn’t seek reelection, citing a desire to spend more time with his family.

He also said he was in good health and was “not in any way hampered.”

North Dakota Gov. Doug Burgum, a Republican, directed all flags in the state to fly at half-staff in honor of the attorney general.

“Like so many North Dakotans who treasured his friendship and admired him for his more than four decades of exceptional service to our state, we are absolutely devastated by the passing of Attorney General Wayne Stenehjem,” Burgum said. “Wayne embodied public service, both as a dedicated legislator and the longest-serving attorney general in our state’s 133-year history.”

“Attorney General Stenehjem spent four decades serving the people of North Dakota, and was a fierce advocate for the rule of law and the rights of our state’s residents. As our state’s longest-serving Attorney General, he worked tirelessly to keep our communities safe and took great pride in supporting our law enforcement officials,” Sen. John Hoeven (R-N.D.) said in a statement. “We will remember Wayne as a true friend and colleague, who will be greatly missed. Mikey and I send our sincerest condolences to Beth, Andrew and the entire Stenehjem family. We will continue praying for all of his loved ones.”