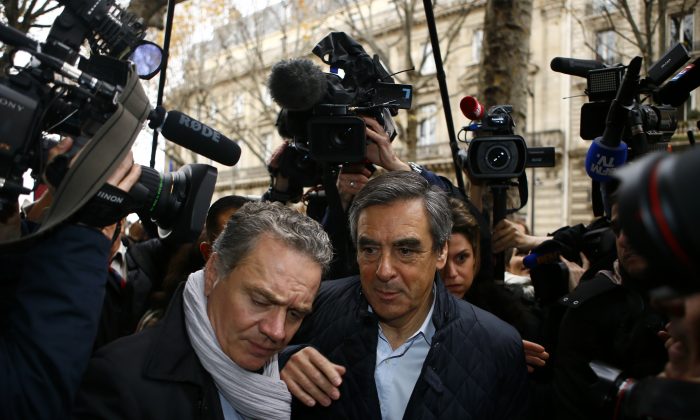 Francois Fillon, right, arrives with his bodyguard at his campaign headquarters in Paris on Nov.21, 2016. Former Prime Ministers Fillon and Alain Juppe will meet in a runoff next Sunday for the nomination to be France's conservative candidate for president. (AP Photo/Francois Mori)
Europe

PARIS—It was as if Robin suddenly trounced Batman: The longtime No. 2 of French conservative politics, the low-key Francois Fillon, unexpectedly beat his world-famous former boss Nicolas Sarkozy in a presidential primary.

It was a huge blow to Sarkozy but not to the country’s likely shift to the right, since Fillon shares Sarkozy’s hard-line stance on immigration and security.

In the first round of the conservative primary Sunday, Fillon won 44.1 percent of the votes, former Prime Minister Alain Juppe 28.6 percent and Sarkozy 20.6 percent, according to results from 95 percent of the polls published on Monday.

Fillon is now seen as the front-runner heading into the runoff against Juppe Nov. 27. The conservative nominee’s toughest competition is likely to come from far-right leader Marine Le Pen, who is hoping to be swept into power on a wave of populism in next year’s presidential election.

Fillon could prove a tough rival to Le Pen, since his traditional conservatism appeals to some of her voter base.

So how did Fillon, credited with barely 15 percent support in polls 10 days before the primary, turn the tables?

Some of it came down to style. Sarkozy’s authoritarian and abrasive personality irritated some in his own camp, and many voters saw the primary as a referendum on the former president.

In contrast, Fillon—who was prime minister under Sarkozy for five years—has cultivated an austere, classic style, banking on family and Catholic values.

Jean-Daniel Levy of Harris Interactive polling institute said Fillon “appears to be calm, soft-spoken, with quite an international stature and an extremely clear language” especially on economic issues. This speaks to conservative voters, Catholics and elderly people, he said.

Fillon especially attracted votes from those who took the streets in 2013 to protest against a law legalizing gay marriage. Fillon pledges to ban same-sex couples from adopting.

He’s also in line with Europe’s concerns about immigration, and pledges to hold a referendum on a quota system to reduce the number of legal immigrants by half.

Like Sarkozy, Fillon is in favor of a national law banning burkini swimwear on France’s beaches.

He advocates free-market policies and proposes to extend the workweek up to 48 hours, from the current 35 hours. He wants to cut taxes, raise the retirement age from 62 to 65 and reduce the number of public servants.

He also wants a “strong Europe” including on defense and security issues, and says European borders should be strongly guarded, with extensive police checks.

Some voters may have chosen Fillon to defy polls and media that pointed to Juppe as the favorite to win the conservative nomination.

Juppe’s economic platform is little different from Fillon’s—raising the retirement age to 65, extending the workweek beyond 35 hours, cutting taxes. But Juppe has taken a more moderate stance on controlling immigration and on Islam, urging respect for religious freedom. Juppe is also campaigning firmly against populism, calling for a “happy” national identity that respects France’s diversity.

Sarkozy, who became president in 2007, had said he was leaving politics when he lost to Socialist Francois Hollande in the 2012 presidential election.

Sunday’s vote has brought a brutal end to his tentative comeback.

“I have no bitterness, no sadness,” Sarkozy said in a goodbye speech on Sunday night. “It’s now time for me to start a new life” focusing on “private passion,” he said, wishing France “good luck.”