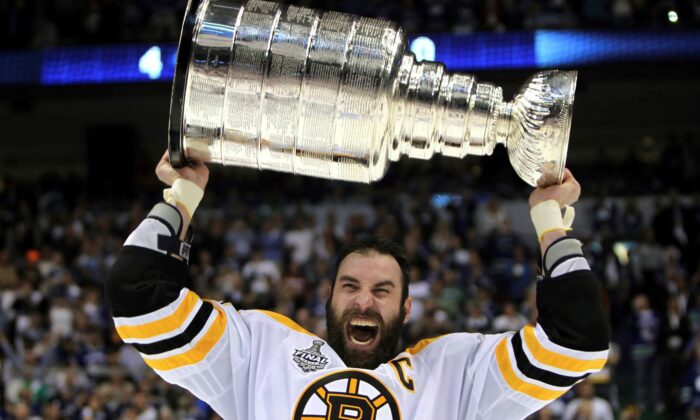 BOSTON—Zdeno Chara announced his retirement Tuesday after playing 21 seasons in the NHL and captaining the Boston Bruins to the Stanley Cup in 2011.

The 6-foot-9 defenseman from Slovakia is calling it a career at age 45. He returned to TD Garden in Boston to make that announcement two years after splitting with the Bruins following 14 seasons.

Chara won the Norris Trophy as the league’s top defenseman in 2009 and also spent time with the New York Islanders, Ottawa Senators, and Washington Capitals. Known more for his ability to keep the puck out of the net than putting it in, Chara still scored 237 goals and added 523 assists for 750 points in 1,880 regular-season and playoff games.

His 1,680 regular-season games played is a record for defenseman. He is a candidate for the Hockey Hall of Fame based not only on his consistency but also his stature in the game from Slovakia to North America.

Chara was the second European captain to win the Cup, following Swede Nicklas Lidstrom with Detroit. He was one of the faces of a winning era for the Bruins, which also included trips to the final in 2013 and 2019, the latter of which he finished while playing with a broken jaw.

Drafted by the Islanders in the third round in 1996, he played his first four seasons on Long Island before getting traded to the Senators. Boston signing him in 2006 remains one of the most impactful free agency signings in the 17 years of the NHL’s salary cap era.

Chara made five of his six All-Star Game appearances while with the Bruins and was one of the city’s most popular athletes during that time. He left in 2020 when the team would not guarantee him a full-time job for the entire season, so he signed a one-year deal with Washington before finishing his playing career with the Islanders.