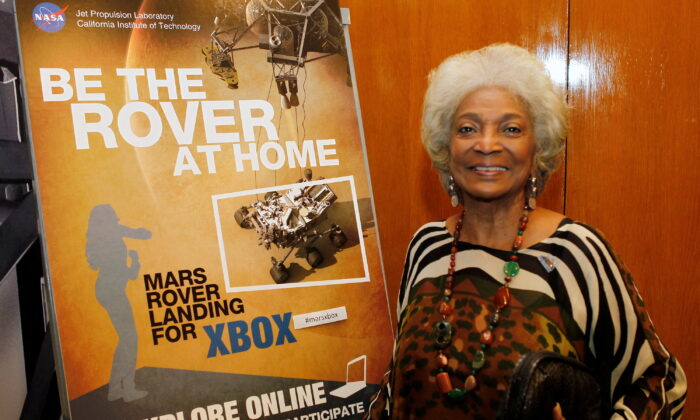 Actress Nichelle Nichols, best known for playing “Star Trek’s” Lieutenant Uhura in the original series, died at age 89, according to her family in a Sunday announcement.

“I regret to inform you that a great light in the firmament no longer shines for us as it has for so many years.

“Last night, my mother, Nichelle Nichols, succumbed to natural causes and passed away. Her light however, like the ancient galaxies now being seen for the first time, will remain for us and future generations to enjoy, learn from, and draw inspiration.

“Hers was a life well lived and as such a model for us all.

“I, and the rest of our family, would appreciate your patience and forbearance as we grieve her loss until we can recover sufficiently to speak further. Her services will be for family members and the closest of her friends and we request that her and our privacy be respected.”

It was signed by her son, Kyle Johnson. He asked for privacy while the family grieves.

Nichols was cast as the USS Enterprise’s chief communications officer Lieutenant Nyota Uhura in the original “Star Trek” series in 1966.

Like other original cast members, Nichols also appeared in six big-screen spinoffs starting in 1979 with “Star Trek: The Motion Picture” and frequented “Star Trek” fan conventions. She also served for many years as a NASA recruiter, helping bring minorities and women into the astronaut corps.

More recently, she had a recurring role on television’s “Heroes,” playing the great-aunt of a young boy with mystical powers.

A spokesman for Nichols’ family told The Hollywood Reporter that she passed away in Silver City, New Mexico. Nichols was living with her son and was recently hospitalized with an unknown ailment, the spokesman added.

In the three recent “Star Trek” movies, the Uhura is characterized by portrayed by actress Zoe Saldana. Other than “Star Trek,” she appeared in 1959’s “Porgy and Bess,” 1966’s “Mister Buddwing,” and 1974’s “Truck Turner,” according to her IMDB page.