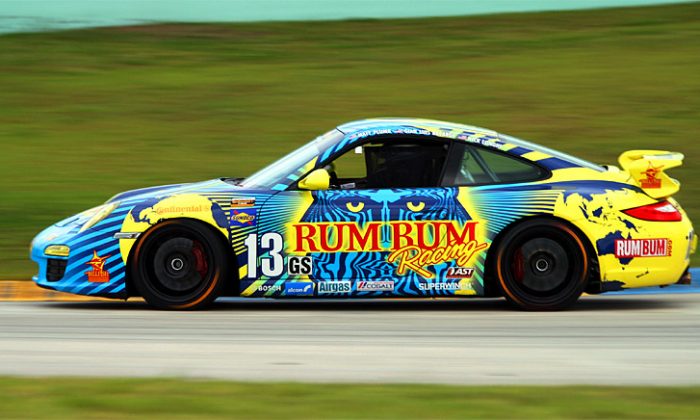 HOMESTEAD, Fla.—Rum Bum Racing’s switch from BMW to Porsche for the 2012 Grand Am Continental Tire Sports Car Challenge season is paying off: the team won in its first outing, at Barber Motorsports Park on March 31, and the team will be starting the pole for Saturday’s Kia 200 from Florida’s Homestead-Miami-Speedway.

“I have to thank the crew, Rum Bum Racing and of course [team owner] Luis Bacardi for putting all this together,” Longhi said in a team press statement. “It’s all his idea—he’s the one who makes it happen for all of us. The crew and [crew chief] Joe Varde especially—and everybody who has been working on this car night and day since we got it.

“Obviously this is a track that I love. I’ve had a lot of success here—this is our second pole. Everybody has tracks they drive well at and this is one of them for me for sure,: Longhi continued. “I feel really at home here. I love the track. I love the banking of the oval. I love the challenge of it, you know—scaring yourself. For whatever reason I like that more than thinking, so it’s better for me!”

Longhi and Plumb won’t have an easy day at the track on race day: Bret Spaude qualified the all-wheel-drive #35 Subaru Road Racing Team Subaru WRX-STI right behind the Rum Bum car with a time of 1:25.927 at 96.361 mph—also good enough to beat Longhi’s old mark.

Longhi recognized how tough the competition might be, but wasn’t letting that spoil his day. “It’s qualifying and that’s good, but the race is a different story. There are a couple of very strong cars that are behind us. With [the Subaru’s] four-wheel drive and the weather down here when it gets hot, I’d say right now they have a hell of a shot at the race so we’re just going to try to keep it together, score some points, and keep the car in one piece.

“This could not be a better scenario for Rum Bum Racing with it being the team’s home race down here in Miami. We love Miami. We love Florida. I’m just happy to be here. It’s a fantastic day.”

Kinetic/Kia Racing continues its success in the ST class, with its third pole in three events, though this time it was Matt Pombo in the #12 Kia Forte Koup, not teammate Andy Lally in the #10 car, who took the honors. No stress for the team, though—Lally qualified second. Pombo turned a lap of 1:31.171 at 90.818 mph, bettering Lally’s effort of 1:31.355 at 90.635 mph.

“This is a whole team effort, and being the monkey behind the wheel is the fun part,” Pombo told Grand-Am.com. “We rolled off the truck fast, and I’ve got to thank Andy for an awesome draft. It’s going to be good to start up front with a clear view for the start.”

A clear view might be hard to find: with 69 cars—30 in Grand Sport and 39 in Street Tuner—entered for Saturday’s event, it is guaranteed that every inch of real estate will be vigorously contested.

Tickets to the race weekend can be purchased through the Miami-Homestead Speedway website.