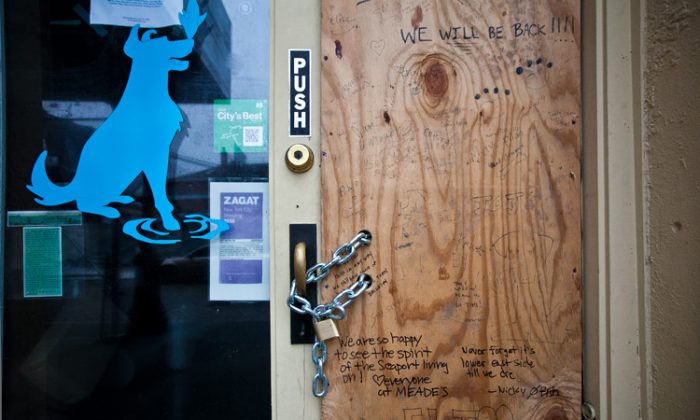 Councilman Robert Jackson speaks with Robert Warner, artist and printer at Bowne & Co. Stationers, a company founded in 1775. Much of the store's inventory was not badly damaged during the hurricane so the store has reopened, though it was empty on Monday afternoon. (Samira Bouaou/The Epoch Times)
US

NEW YORK—A host of small businesses remain closed for a variety of reasons in the South Street Seaport area of Lower Manhattan, while those that have reopened after Hurricane Sandy are looking at a long winter.

The New Amsterdam Market, held on weekends near the water East River, will close after this Sunday, according to founder Robert LaValva. The market typically brings 1,000 to 1,500 people into the area, many of whom then visit some of the small businesses in the area.

LaValva wants to start the market back up in February instead of its typical April start.

Jacqueline Goewey, owner of Made Fresh Daily on Front Street, said she is worried what will happen after the market shuts down for the season since it brings so many people into the area.

The store was fairly busy Monday afternoon but many businesses in the area remain closed. Made Fresh Daily sustained $30,000 to $40,000 in damages from Hurricane Sandy. It opened several weeks after the hurricane with many things replaced; the wooden counter next to the front window still has a little sawdust on it.

“This is not the Seaport that we are used to,” said Councilwoman Margaret Chin, who took a tour of the area with other council members, staff, other officials, and press on Monday.

About 13,000 small businesses were impacted, mostly flooded, by Hurricane Sandy according to the city’s Department of Small Business Services. Nearly 4,000 of those were in Lower Manhattan, including the South Street Seaport area.

“Tour buses pull up here and they’re trying to figure out where to go,” he said, gesturing to a block of closed small businesses.

Across the street are some chain stores. These stores “can afford to stay closed longer, and make a real estate decision,” said Walsh. Meanwhile, many small-business owners can’t afford to do the same thing.

“And some of it for them is an emotional decision,” said Walsh. “When you look at the signs in the window it says, ‘Damn it, I’m going to come back.'”

Chains are important, but small businesses give areas the unique flavor that people look for when they visit New York said Walsh.

“These are the ones that add character,” he said. “People come down because they want the New York feel.”

Frustrated owners met with Walsh, Chin, and other officials in the backroom of Pasanella & Son, a wine shop that is one of those that has reopened but has struggled to bring in customers.

Part of the problem is the extensive damage to infrastructure from flooding. For many buildings in the area, electrical components are in the basements, which were flooded. One of the major landlords in the area, the Durst Organization, is currently moving all the mechanical systems out of the floodplain, said a representative.

“These are complicated systems, and it takes a long time,” he said.

People with companies who have Durst as their landlord are not pleased with the speed. David Trotter, director of operations with Jack’s Coffee, said being told they can’t reopen before February or March really hurts the business.

Business partners Pam Renna and Eve Degrezia, who own Samsara Cafe and Manhattan Plant Design Experts, are fighting for survival at this point.

“If we lose our business we lose everything,” said Degrezia. “We lose our ability to pay our bills, to survive.”

Many businesses in the area are still paying off loans from post-9/11 recovery, said Amanda Byron Zink, owner of the Fresh Salt, where workers are rehabbing and putting in new furniture.

“I can’t afford to take out any more loans,” she said.

The city’s Department of Small Business Services has awarded nearly $3.8 million. Loans are offered for up to $25,000 with zero percent interest for the first six months, and 1 percent interest for 24 months. Also, grants of up to $10,000 are in some cases available for people getting loans.

The Alliance for Downtown New York, an organization that does a variety of things in Lower Manhattan including providing research and advocacy, awarded $266,000 in grants and $120,000 in deferred grants Tuesday.

The alliance had stopped taking grant applications on Dec. 13 after more than 130 businesses applied. Applying businesses had to have 50 or fewer employees and gross annual revenues of $5 million or less, among other conditions.

There is still a sense of hope for the area. Small-business owners are discussing forming a merchant’s association or a local development corporation, said Walsh.

Walsh was involved with helping revive Union Square from 1989 through 1997.

“I think there’s some real power during a crisis, people put aside differences and they say ‘We’re going to band together,’ and I see some of that with the merchants here,” he said.

“This place will bounce back,” he said. “They’ll figure it out.”