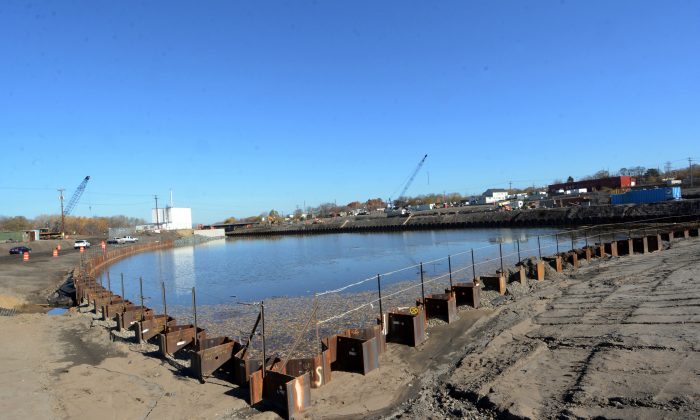 Waters of the Mohawk River flow into the new harbor area at the Rivers Casino & Resort at Mohawk Harbor in Schenectady, N.Y., on Nov. 3, 2015. Nearly a year after three casino projects in New York were chosen as part of a plan to boost the upstate economy, those projects are still awaiting casino license following delays caused by bureaucratic red tape and, in one case, lawsuits from local opponents. (Marc M. Schultz/Schenectady Daily Gazette via AP)
Business

Long Wait May Be Ending for NY’s Casino Projects

Nearly one year later, the three casino projects are still awaiting formal licensure from the state’ Gaming Commission, a lag marked by bureaucratic red tape and lawsuits that quashed any hopes of a quick start to construction.

“Casino licenses have been spoken about in New York state since the days of Nelson Rockefeller, so it feels like we’ve waited generations for this to happen,” said Charles Degliomini, executive vice president at Empire Resorts, the company behind the Montreign resort casino planned for the Catskills. “But this is a highly regulated process and they’re going to get it right.”

The Gaming Commission is expected to issue the formal licenses to Montreign, the Lago Resort and Casino in the Finger Lakes and Rivers casino in Schenectady by the end of the year. A state panel endorsed the three proposals last year after considering 16 different applications. The commission then spent a year conducting background checks, adopting the necessary regulations to issue the licenses and reviewing the final details of the projects.

It’s been a longer wait than many initially expected. The developers behind the Lago project in Tyre had hoped to open in early 2016. Lago is now hoping for early 2017. In the meantime, a fourth casino project in the Southern Tier has joined the back of the line of those awaiting licensure.

Lee Park, a spokesman for the Gaming Commission, noted that the commission has consistently said a decision was likely before the end of the year, and that a one-year wait is actually not that long when one considers the detailed regulations concerning gambling.

“It is in everyone’s interest to get these licenses issued as quickly as possible,” he said. “We’re not cutting any corners. We are moving as expeditiously as possible.”

Republican state Sen. John Bonacic, chairman of the Senate’s Racing, Gaming and Wagering Committee, said the process “has taken longer than I would have hoped” and that he wants to see the casinos built “as soon as possible to bring construction and permanent jobs to communities that desperately need them.”

Government regulations aren’t the only thing standing in the way. Lago has faced legal challenges from local residents opposed to the casino. The local town board had to approve the project’s site plan a second time after an appeals court faulted the process local officials used in the first round. Lago was forced to stop preliminary construction work until the board completed the do-over.

Another lawsuit was announced this week by Casino Free Tyre, a group of some 40 local residents, argues the town board didn’t properly consider how the large casino project would affect the local environment. Lago and local officials say the suit is meritless, though the delays are frustrating.

Jim Dawley, one of the residents concerned about Lago, said he too is surprised it’s taken this long for the project to be licensed. He said he’s hoping to delay the project even further—or derail it entirely.

“We don’t think it belongs here,” he said. “But if it was to come we’d certainly want it done properly.”

The developers behind the $425 million casino—which will also include a hotel—say the project will create 1,800 new jobs and generate $80 million in casino taxes.

As they wait, the developers are doing what work they can now—site clearing, water and sewer lines, parking garage excavation—so construction can begin in earnest when the licenses are granted. There’s a limit to what work can be done, however, because financing deals to pay for the lion’s share of the construction won’t be approved until after the licenses are granted.

Meanwhile, those who hope the casinos will bring jobs and economic activity to upstate New York try to be patient.

“I’m concerned,” said Tyre Town Councilman James Rogers, when asked about the long wait for a license. “But it’s government, after all.”