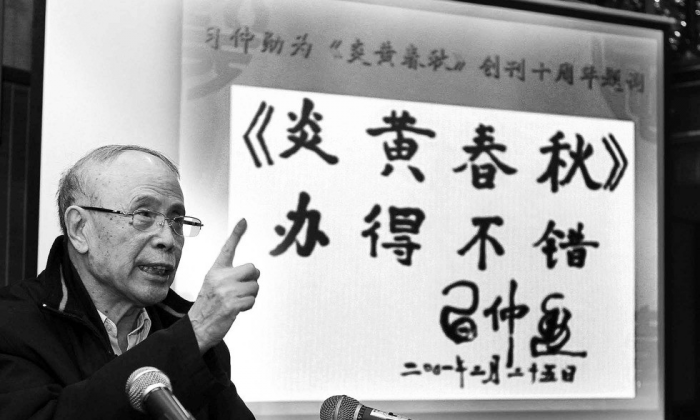 Du Daozheng of Yanhuang Chunqiu in an undated photograph. (via Baidu)
China

Yanhuang Chunqiu, the reformist publication formed in 1991 following the Tiananmen Square protests, was one of its kind. Not only did it carry articles supporting political reform, but it did so from within the establishment.

Now the publication, sponsored by the Chinese National Academy of Art, is closing for good following the purge of its 92-year-old publisher Du Daozheng and an abrupt reassignment of personnel made by the Academy.

A July 17 statement made by the magazine’s editorial staff reminded observers that in the future, any periodical with the title of Yanhuang Chunqiu should be considered fake.

This didn’t stop personnel from the Academy storming into the publishing office, changing the passwords on the publication’s computer accounts, and taking over its finances, however.

“Our finances are independent,” said Du in an interview with Radio France Internationale. We have about 8 million yuan (about $1.2 million) … Now all this money has become theirs. This is open robbery! This is exactly like the Cultural Revolution,” he said.

In an exclusive interview, Du Li, a professor of French at Sun Yat-sen University in southern China and Du Daozheng’s second daughter, told New Tang Dynasty Television (NTD) that the Academy had broken its original agreement with the magazine. She believes that the sudden reassignments were an attempt to take over the publication and usurp its independent editorial stance.

“There was an agreement in three areas,” she said. “Personnel, finances, and publication. The Academy was to only provide suggestions and was allowed review. But the magazine would have the final say on content.”

The publication’s relationship to the Academy is a unique product of the Chinese media environment, where every publisher must have a “supervising institution” which is to ensure its political correctness and assert the authority of the Party when called upon to do so.

The history of the magazine has been fraught with challenges and pressure from the propaganda establishment—in 2013, for example, its website was temporarily shut down by Chinese internet censors after it published an article calling for the guarantee of constitutional rights.

The name “Yanhuang Chunqiu” can be translated literally as “The Chronicles of Emperors Yan and Huang.”

Du Daozheng was abruptly removed from his position, his daughter said, earlier in July. Her father was in the hospital when toughs from the Chinese propaganda bureau—the State Administration of Press, Publication, Radio, Film and Television—arrived for a menacing chat.

“At first they appeared to express their sympathy and goodwill,” Du said. “They brought some fruits and talked about all manner of things. Finally, they showed their true colors and produced a document.”

The document was from 2007, and it explained that senior Party officials should step down with age (it did not specify what age), and shouldn’t hold on to their leadership positions indefinitely.

But Yanhuang Chunqiu, Du Li argues, was not a state publication as it was run with independent financing. The authorities, she said, “had issued a special notice that allowed continued operations.”

Swiftly following the propaganda workers, a group from the Chinese National Academy of Arts arrived and produced a document of new appointments for the magazine. This paper was read for Du Daozheng to hear. It turned out that they had already gone to the publication office that morning, Du Li said, and physically taken over.

“The editors-in-chief hadn’t had a chance to speak to my father prior to this,” Du Li said.

Yanhuang Chunqiu deputy publisher Hu Dehua, the son of deceased Chinese reformist statesman Hu Yaobang, was in Japan at the time and was not informed of the events.

Academy and state propaganda staff seemed to be trying to create a “more pliable staff” for Yanhuang Chunqiu, Du Li said. “They wanted to appease other magazine staff members. They offered some of them government positions as they didn’t want them to leave. They also asked my younger sister to be the deputy publisher,” Du Li said.

Huang Jinqiu, a former reporter and a political dissident who was once sentenced to 12 years in prison on charges of “subversion” for writing articles calling for an end to one Party rule and political reform, spoke with NTD about Yanhuang Chunqiu’s fate.

“I think the incident shows that inside the Chinese Communist Party, especially the propaganda system, there is a far-left faction that has been trying to interfere with reforms in the media,” Huang said.

“Yanhuang Chunqiu is a product of China’s reform and opening,” he continued, “and it has the support of many Party leaders and senior cadres, including General Xiao Ke and Xi Zhongxun, the father of Xi Jinping.”

Xiao Ke was a senior Chinese general who had called for the People’s Liberation Army to avoid using force during the Tiananmen Square protests. He later launched Yanhuang Chunqiu in 1991.

The publication printed a dedication written by the elder Xi in its January 2001 edition, with his portrait next to the words. “Yanhuang Chunqiu is pretty decent,” it says.