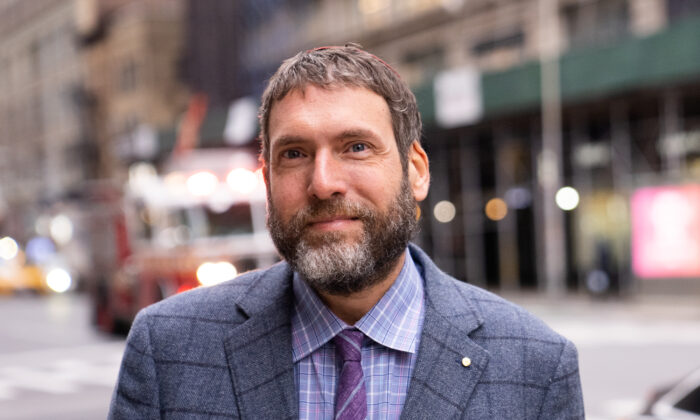 Liel Leibovitz, a senior writer for Tablet Magazine and host of the Unorthodox podcast, told The Epoch Times that in the last few years he has found himself, “politically homeless,” falling out with his circle of people because he challenged their views.

Leibovitz is the author of the popular Tablet essay on this topic, “The Turn: When I saw the left give up everything I believe in, I changed politically. You can, too.”

“The turn is the moment when you kind of begin to understand, a little bit like that movie The Matrix, that everything you assumed was the very fabric of reality, it’s not just politics, it’s the entirety of existence, may be called into question,” Leibovitz told Jan Jekielek, host of EpochTV’s American Thought Leaders program.

“I grew up like so many people with this idea that if you were a good, decent human being, you are, of course, are on the left,” said Leibovitz. “And on the right, there were at best, people who only cared about money.”

Leibovitz said that in his circles he felt he couldn’t freely express himself and say things that are empirically true, “for example, that the notion that there are only two genders, which is a notion that is confirmed by literally the biological makeup of every cell in your body, is not only dangerous but now wrong.”

He began to realize that his allegiance to the left was misguided and that he did not agree with what they seemed to value or seemed to believe.

“Once you start asking yourself ‘wait a minute, what is it that you guys actually believe? What can I and can I not say?’ And look at what has actually become of so much of contemporary American sort of establishment democratic left of center politics, you figure out that none of it is true. You figure out that the party that hails itself as being the party of the working class supports this major oligopoly of corporations.”

Because Leibovitz chose to voice disagreements with what his friends and family were saying, he lost many of those relationships.

“It’s breaking apart from family and friends and loved ones and feeling judged. This notion that you have to sit at the dinner party, and feel, for example, that you can’t say that maybe burning stores and looting isn’t the best way to demonstrate for social justice,” said Leibovitz.

He likened the destruction of family and faith to the two key goals out of the 45 (pdf) that communists had explicitly stated in the 1960s.

“It turns out that we’re still fighting the Cold War. And it turns out that the communists are winning,” said Leibovitz, “to know that the destruction of both the church and the traditional nuclear family were goals one and two, respectively … because that’s where the real source of resistance to the sort of authoritarian dominance comes from.”

The prevalence of technology and social media is further eroding people’s connections to one another and making it harder for them to relate as fellow humans, said Leibovitz.

Leibovitz experienced a lack of empathy from many of his university colleagues, as they warned him that his views were not welcomed.

“If you don’t have that basic human empathy, this connection to a person, because he’s a person, because you love them, because you feel connected to them. And if you are no longer able to use that love and empathy to strike a real dialogue or feel the emotional exchange of not just ideas, but feelings between people, then I don’t want to be a part of this camp.”

Leibovitz urged people who are in the situation of being “politically homeless” to reflect on the cost of staying silent.

“However, I think the thing to remind ourselves of is that there is no alternative. Because once you start lying to yourself, once you start saying, ‘Well, I accept the fact that I now must pretend I can only say this, even though I know this to be completely untrue because otherwise they just can’t go to this dinner party or can’t keep this job’ … then something very profound and very human has already died inside of you, you’ve already paid a price. And the price is much, much, much higher than any one you could pay regardless. Sure dissidents suffer greatly, which is why we see so few of them. But they are free.”