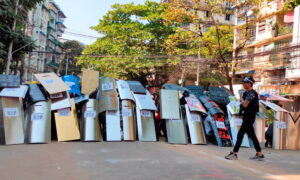 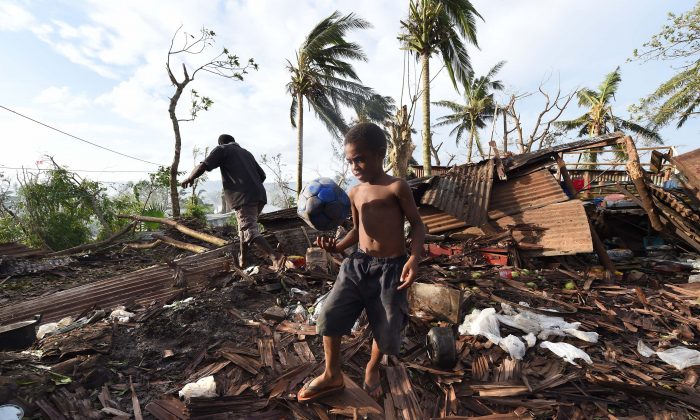 A local Vanuatu boy named Samuel walks through through the ruins of his family home with his father Phillip, in Port Vila on March 16, 2015. (Dave Hunt-Pool/Getty Images)
Asia & Pacific

Long Road to Recovery for Vanuatu After Massive Cyclone (Video)

After spending 12 hours huddled in the concrete bunker she never expected to use, Port Vila resident Samantha Johnson said she felt lucky to be alive after Category Five Cyclone Pam tore through the tiny South Pacific nation Vanuatu, Friday March 13.

“Abject terror” kept her and her family awake all night as they heard the destruction occurring outside.

“You couldn’t hear yourself talk, it was just a constant screaming,” she said in a phone interview from Port Vila, the capital.

When her family eventually surfaced around 4am they found the neighbour’s roof sprawled across their driveway and a scene that could have been from a disaster film.

“The devastation in Port Vila itself is just indescribable,” Ms Johnson said.

As far as the eye could see, power lines were down and the normally lush tropical vegetation was stripped bare.

To date, 11 people have been confirmed dead and at least 3300 displaced from the cyclone, but aid agencies are warning of many more fatalities once communication is restored with outer islands.

Vanuatu, an archipelago of 65 inhabited islands and a population of around 266,000, lies 1750 kilometres east of northern Australia and west of Fiji.

Cyclone Pam, Vanuatu’s most destructive cyclone in living memory, was expected to move between Vanuatu and Fiji but suddenly veered southwest, bringing the eye of the cyclone right over Efate Island, where Port Vila is located, and other islands lying to the South.

Sustained wind gusts up to 250 kilometres per hour were recorded, along with torrential rain and massive storm surges.

Vanuatu’s President Baldwin Lonsdale, speaking from Japan where he was ironically attending a disaster management conference, described the storm as “a monster that has devastated our country”.

“We see the level of sea rise … The cyclone seasons, the warm, the rain, all this is affected,” he said. “This year we have more than in any year … Yes, climate change is contributing to this.”

A volcanic island archipelago with several active volcanoes above and below sea level, Vanuatu is already recognised for its vulnerability to extreme events.

Ms Johnson, who runs the resort Surfside, a collection of villas on Pango Beach near Port Vila, said the beach had been “completely nailed”. The sea wall was destroyed and massive boulders were thrown up on the sand.

We had about 10.5 to 12 metre tide that came right over the top of the villas.
— Port Vila resident Samantha Johnson
“Where the restaurant was still standing, it’s like it has been torched with salt water,” she said.

The locals are in “disbelief” at the devastation and will be hard hit, Ms Johnson said, the cyclone destroying their main livelihoods— tourism and agriculture—for months to come.

“Everyone is just walking around like walking zombies not knowing which way to look,” she said.

Resident Chloe Morrison, an aid worker with World Vision, said they were particularly concerned about populations on the outer islands, as the people there live in traditional villages along the coast.

“We haven’t been able to get a great picture of what happened there,” she said speaking by phone from the capital on Monday night, three days after the storm hit.

Ms Morrison said on Efate, whole villages had been wiped out, bridges and roads had been destroyed, and the harbour foreshore, where cruise boats moor and locals sell traditional craft, was a mess.

Water services had been restored that day and food was available again in supermarkets that had finally reopened. People were also collecting fruit and crops that had been torn from the ground, but sanitation and access to food, shelter and clean were huge issues, Ms Morrison said.

“These people don’t have homes to live in and that’s the immediate problem, but obviously this is going to need a much longer term response,” she said.

The Challenges of Clean-Up

International aid agencies, including the Red Cross and the UN, are already on the ground, and a number of agencies had managed to place emergency supplies before the cyclone hit.

Australia has offered $5 million of aid to non-government organisations and sent three military aircraft which have delivered priority items like food, water and shelter, but Ms Morrison said the sheer scale of the devastation will be a challenge.

“It is going to be a real effort to rebuild not just a city but a whole country,” she said.