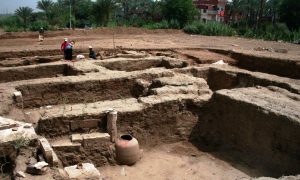 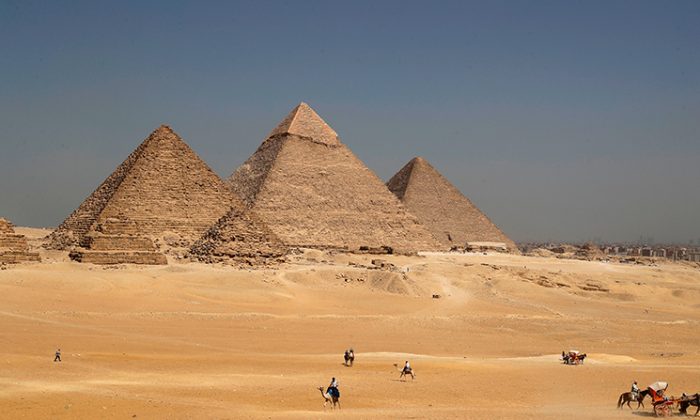 The pyramids on the plateau of Giza outside Cairo on Oct. 2, 2018. (Joseph Eid/AFP/Getty Images)
archaeology

A 2,200-year-old long-lost ancient temple linked to Pharaoh Ptolemy IV has been discovered by archaeologists in Egypt, according to reports.

The temple ruins were accidentally found in early September by a group of construction workers in the village of Kom Shakau in northern Sohag as they carried out some drilling work, according to a Facebook post by Egypt’s Ministry of Antiquities.

After the drilling works were suspended, archaeologists unearthed the temple ruins inscribed with the name of Ptolemy IV, the fourth pharaoh of Egypt’s Ptolemaic dynasty who is believed to have ruled between 221 B.C. and 204 B.C.

An east-west and north-south wall, as well as a southwestern corner have been unearthed so far.

Dr. Mostafa Waziri, general secretary of Egypt’s Supreme Council of Antiquities, said in a statement on Oct. 6 he had assigned an archaeological mission to recover as much as possible of the ancient temple which sits on the western bank of the Nile.

According to historians, Ptolemy IV did not have a successful reign, and took more interest in pretending to be an artist and overindulging than running his own kingdom.

A well-preserved statue of a sphinx was found by archaeologists in a temple in upper Egypt last year.

Archaeologists working on a project to reduce groundwater at the Kom Ombo temple in Aswan, Egypt, uncovered a well-preserved sphinx statue last September, buried on the temple’s southeast side, near where other relics have recently been found.

Aswan is about 560 miles south of Cairo, on the banks of the Nile River.

Waziri posted on the Ministry Facebook page that the sphinx was found near where two sandstone reliefs of King Ptolemy V had been uncovered about two months earlier.

Waziri believes that the statue dates to the Ptolemaic period, between 305 B.C. and 30 B.C., based on where it was discovered.

Dr. Abd Al-Moneim Al-Sayeed, general director of the Aswan Antiquities, said in the same post that further studies would be undertaken to learn about the origin of the newly uncovered statue.

Sphinx statues are usually found in or near royal tombs. The classic Egyptian sphinx depicts a lion’s body with a human head, generally the head of whichever pharaoh ruled at the time. The face on this latest statue is extremely well preserved.

The best known sphinx statue, the Great Sphinx of Giza, has an uncertain history. Scholars assume that the current head represents the pharaoh Khafra.