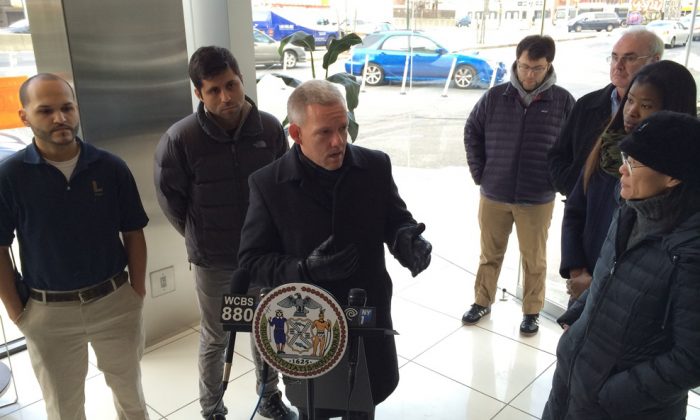 Council Member Jimmy Van Bramer, along with a group of concerned citizens, called for more signage at an intersection in Long Island City Dec. 16.

“It is the Department of Transportation’s responsibility to maintain the safety of our city’s pedestrians,” said Van Bramer in a statement. “The residents who live at the intersection of 49th Avenue and 11th Street in Long Island City have been ignored by DOT for far too long.”

The intersection abuts the exit from the Pulaski Bridge, a bustling thoroughfare of Brooklyn commuters. Residents say cars regularly run red lights in the area, and without a crosswalk, let alone lights or a stop sign, residents are worried about their safety.

There have been no fatalities or known injuries at the intersection, Van Bramer said. But he doesn’t want to wait for an accident to happen for things to change.

“There are a variety of solutions that can be implemented immediately to make this heavily trafficked intersection safer. I do not understand why DOT has chosen not to take action. Now is the time to act,” said Van Bramer. “Not after a tragedy occurs.”

Van Bramer made the same request to the DOT more than a year ago. According to him, DOT said the intersection was perfectly safe and did not warrant more signage. The DOT did not respond immediately for a comment.

Van Bramer, who represents the 26th Council District, says he hopes de Blasio will appoint a DOT commissioner who puts New Yorker’s safety first and foremost. He said he is tired of waiting for years while the department drags its feet on improvements needed to keep his constituents safe. Van Bramer demanded that the DOT comprehensively study the intersection and install either a stop sign or a stop light, as well as a pedestrian walkway across 49th street.

Street safety is on a list of priorities for Mayor-Elect Bill de Blasio. One the items de Blasio’s policy book is Vision Zero, a plan to have traffic-related fatalities and injuries down to zero within the next ten years.

Vision Zero was an initiative started in Sweden in 1994 and is based on the idea that streets should be designed to safeguard against human error.

Sweden has not achieved its Vision Zero goal, but as they say: “Shoot for the moon. Even if you miss, you’ll land among the stars.”

The next commissioner of the DOT will, like the current one, be limited by laws and regulation decided at the state level.

“To put us on this path, de Blasio will stop waiting on Albany and fight for home rule, so New York City—on its own—can install red light cameras and speed enforcement cameras around hundreds of schools and senior centers,” reads de Blasio’s policy book.