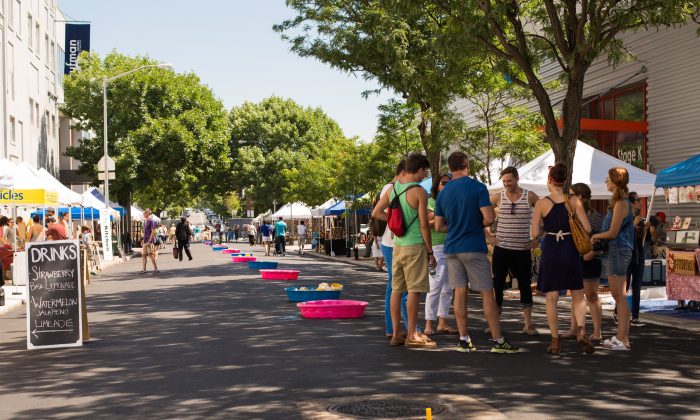 Long Island City and Astoria Grow Up Alongside Film Industry

NEW YORK—Western Queens has recently—and finally—found its moment after decades of fallen expectations. With its proximity to Midtown and access to transportation it had always seemed to be the next neighborhood as people increasingly took to the outer boroughs, but the neighborhoods never quite made it.

Now with nearly 10,000 residential units in the pipeline, trendy restaurants, a hotel boom, pressure to grow in every real estate sector, Long Island City and Astoria are experiencing growing pains, much of which stem from the success of the arts and culture embedded in Western Queens.

People working in the area and many a resident will say, about three decades ago one would not want to walk the streets after dark, adding an anecdote or two about an uncle or friend who was robbed at gunpoint.

But it had been a vibrant neighborhood before then. Long Island City, which is geographically the center of the New York City, has a long industrial history. When manufacturers fled the city around the 1970s and 1980s, the neighborhood was similarly hit.

On 36th Street, for instance, is Adolph Zukor’s old film production facility [housing several studios], which the U.S. Army bought after Zukor joined the other studios moving to Hollywood. The Army employed thousands until 1970, when the Army stopped producing films. In 1972, the federal government handed the facility over to the city, which was on the verge of bankruptcy. It sat empty, attracting the sort of blight vacant buildings tend to.

When real estate developer George Kaufman purchased the property in 1980, “we were pulling mattresses out of the buildings,” said Hal Rosenbluth, president of Kaufman Astoria Studios.

Today Kaufman Astoria Studios is fully occupied with productions. It’s the center of a cultural hub attracting young professionals and talent to the neighborhoods, and that growth has been deliberate.

“Part of our job was to reinvigorate the neighborhood,” Rosenbluth said. With the intention of creating a livable Astoria, Kaufman courted and partnered with other businesses, bringing in a multiplex theater, restaurants, an art school, a museum, and the impact has spread out far beyond Kaufman’s studios.

Earlier this year the area around the facility was designated as the Kaufman Astoria Arts District—the first cultural district in Queens. The Long Island City flea market partnered with Kaufman Astoria to create the Astoria flea market for the first time this year, hosted in front of the studio’s gates to run through the summer and showcase crafts by artists from across the city.

Silvercup Studios in Long Island City has done similarly, investing in residential real estate and cultural sites like the Queens Museum when the studios saw success.

“By using our stages as an anchor, we were able to use the arts district to grow and brand the neighborhood,” Rosenbluth said.

Silvercup is the largest studio in the city, and in Brooklyn lies Steiner Studios, the largest production studio complex outside Hollywood. Since the state tax incentive program began in 2004, film and television production in New York City has continually grown. So far, 2014 is a record year for production and New York has filmed more drama pilots than Los Angeles according to a recent report.

“When they’re doing well, we all do well,” said Juanita Mencia, who manages the offices of Mutual Hardware on the Long Island City waterfront. “The other day—you should’ve seen it—trucks were all up and down the block, there were so many.”

Mutual Hardware is a general hardware store with a specialty in serving the production industry, carrying specific items and brands the crews favor. In recent months, orders have been crazy, its salespeople said. Mutual is carrying so much truss (used to hang things like lighting for productions) it has rented space next door to hold it all.

“They’ve figured out how we work, which is always last minute,” said producer Carol Cuddy recently at the LIC Summit. “We think everything’s an emergency, we need it now, now, now.”

In just one season of CBS’s drama “Elementary,” Cuddy said, they spent $1.2 million at Mutual Hardware.

They also spent over $600,000 at a local lumber store, less than they would have had they needed to build big sets. Other monies spent locally include, $300,000 in car services, $1 million in food, not including catering, and tens of thousands at each of the many other local businesses like dry cleaners and makeup suppliers.

The majority of a production’s budget is spent quickly, over the course of a couple of weeks while filming, so surrounding businesses feel an immediate impact.

The neighborhoods are filled with businesses supporting studios like these, but the spillover has also positively affected other businesses, which is needed for a livable neighborhood.

Astoria and Long Island City have been well kept secrets turned into vibrant, cultural areas, said Mark Atkocaitis, the manager of the restaurant Astor Room, which is owned by Kaufman Astoria studios.

Atkocaitis had been living in the East Village when he started working in Astoria a few years ago, and had been surprised the neighborhood was yet to be discovered. It’s due to the success of a lot of arts and cultural institutions, Atkocaitis said, like the beer garden in Studio Square and the Museum of the Moving Image.

Atkocaitis had moved to the neighborhood partly because it was cheaper, but now rents are rising as space is limited. Expensive rents are a real concern for many businesses in the area, even those that benefit from busy production seasons.

Mario’s Deli on the waterfront, for instance, saw so much business from shows that the owner started naming sandwiches after them. But it didn’t compare to the steady business he got from manufacturing employees coming in for lunch years ago, according to the LIC Post, but last year the owner decided not to renew his lease because of the high rent.

However, the spike of residential development turning Western Queens into a trendy place is a positive thing for a star-driven industry like film and television.

“It’s terrific,” Rosenbluth said. “Years ago I couldn’t get a tenant to come over to our neck of the woods because the talent they needed … they were all living in Manhattan.”

Zukor had originally chosen to base his studio in New York City for that very reason—the best talent was on Broadway and the vaudevilles.

Now the talent wants to walk to work, bike to work, and they want to do it in the outer boroughs, Rosenbluth said, in Western Queens and popular Brooklyn neighborhoods like Williamsburg and DUMBO.

Arts and Culture in Queens Map

MAP BLURB: As with all industries, related businesses will cluster around the same geographic area. In addition to the hardware, lumber, props, and makeup suppliers supporting the film and television production business in Western Queens, the arts and culture have made the neighborhood attractive to people looking for a place to live.