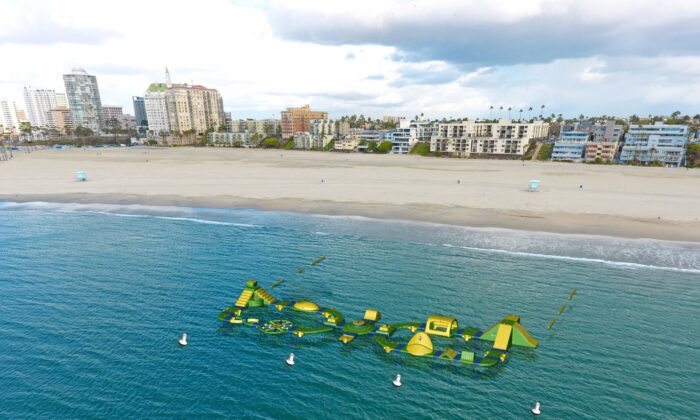 The City of Long Beach will kick off summer with the opening of its newest attraction, an inflatable playground out on the ocean water, on June 25.

“Families really need to see this floating playground off Long Beach’s coast to believe it—folks are going to be spending a lot of days out here on the water enjoying this new attraction, so you’ll want load up on the sunscreen this summer and for many summers to come,” City Councilwoman Cindy Allen said in a statement.

Residents are invited to join the attraction’s grand opening on Saturday at 1 p.m. at Alamitos Beach.

Known as the “Wibit,” the aquatic playground consists of multiple floating structures connected in the shape of figure eight.

Residents can swim, balance, climb, jump, and slide at the playground, which features a springboard, bouncer, monkey bars, and other elements.

The attraction is free and open to the public from 9 a.m. to 8 p.m. daily. The closing date is not yet released. Children under 14 must be supervised.

Long Beach’s first Wibit playground debuted in 2018 at Bayshore Beach and has become one of the city’s most popular recreational sites.

“I know our community really enjoyed the Wibit playground at Bayshore Avenue, and we’re excited to launch this second one at Alamitos Beach just in time for summer,” Mayor Robert Garcia said.

The new Wibit costs $400,000 and was made possible by the Tidelands Operations Fund, which has funded repairs and upgrades for many public facilities in Long Beach.