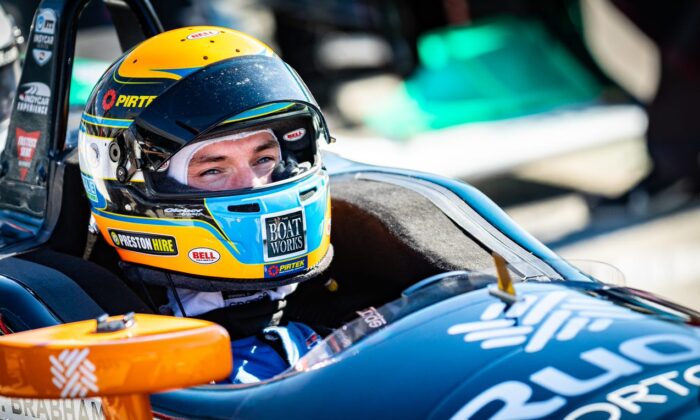 LONG BEACH, Calif.—As the racecar driver of an Acura NSX ripped through the track at over 100 miles per hour, the tire squealed as he rounded the corner, shooting pebbles off the pavement towards the bleachers.

Long Beach is gearing up for the 47th annual Acura Grand Prix, where IndyCar drivers will race through the city’s downtown streets April 8–10 as part of the 2022 NTT IndyCar Series.

The event, which started in 1975, features a 1.97 mile, 11 turn street circuit track surrounding the Long Beach Convention and Entertainment Center, with the start and finish line on Shoreline Drive.

Not only is the track one of the oldest racing circuits in U.S. history, but the weekend event is also one of the largest paid spectator events in Southern California, drawing more than 180,000 racecar enthusiasts each year, according to a statement by the event organizer.

“This track is one of my favorites and … just being a street course it has added elements—you’re driving through people’s homes, hotels, restaurants, bars, and so the atmosphere is just another level compared to a normal race,” said Chaves, who will be competing in the IndyCar racing.

The setup for each competition takes months and sometimes years of planning ahead for the win, said Chaves, who has been racing for nearly 20 years.

“When I’m in the driver’s seat, I’m at home,” he said. “If you’ve devoted your whole life to one thing, one specific skill, when you’re doing it, it just feels natural.”

Asked to describe the sentiment of racing to those who have not experienced it before, Chaves likened the feeling to taking off in a fighter jet.

“It’s a big shock to your body,” he said. “It’s very exciting and can give a lot of adrenaline.”

The featured race will be the IndyCar Series event on April 10, presenting an international field of world-class drivers, racing cars with turbocharged engines supplied by Honda and Chevrolet.

As one man got out of an IndyCar for the first time after a lap around the track on March 29, he shouted, “I’ve never felt a bigger rush in my life!”

Drivers practicing on March 29 ahead of the April 9 Super Drift Challenge swung their heavily-modified vehicles near sideways around the corners of the track, instantly generating giant clouds of smoke while their engines were screaming—a sight to behold for both car-lovers and regular people alike.

For those interested in attending the Acura Grand Prix of Long Beach, tickets are available for purchase at gplb.com.