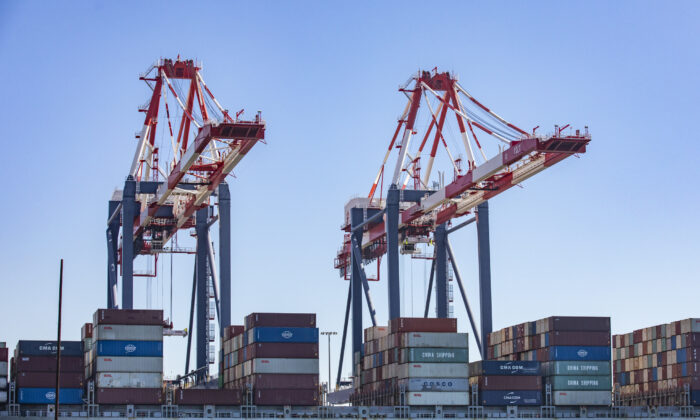 The quantities of cargo containers waiting to be delivered at the Port of Long Beach have experienced close to a 40 percent drop compared to a peak in late October. The ease of the supply chain bottleneck is attributed to a combination of efforts made by private citizens and the city government.

“Cargo aging at the port is now down 37 percent, which is a major improvement,” stated Richard F. de la Torre, community information officer of Long Beach City Development Services in a Dec. 8 email.

“Changes in port operational hours, additional storage location at the port, cooperation from shippers, truck drivers and other labor partners have all contributed to the relief seen thus far,” Torre also stated.

The supply chain bottleneck crisis was seen at its worst level during October when President Biden visited Los Angeles. Biden met with leadership from the Ports of Los Angeles and Long Beach and the International Longshore and Warehouse Union on Oct. 13 and requested both ports move towards 24/7 operations.

However, the cargo aging situation at Long Beach did not improve until private citizen Ryan Peterson took the initiative to pinpoint the real problem in the process of the Long Beach Port’s cargo operation process.

Peterson is the CEO of Flexport, a freight forwarder company headquartered in San Francisco, which serves more than 10,000 clients in more than 200 countries around the world.

On Oct. 21, he decided to go investigate the Long Beach Port cargo aging issues himself and tried to find the core problems causing the bottleneck of the supply chain. According to what he wrote on Twitter, he took a boat tour around the port and spent more than three hours closely observing the port’s operation. Much to his surprise, he found that out of a few hundred cranes inside the port, only about seven of them were in operation. And the reason? There were only a few trucks coming to the port to pick up the cargo.

So where were those trucks that were supposed to come to haul away the containers piled up inside the port? This was the question that eventually led Peterson to the solution he was looking for to solve the cargo aging problem.

What Peterson discovered was that many truck drivers drove their truck cabs away, and left their truck chassis loaded with empty cargos sitting around the port area. Drivers did this only to obey the city’s zoning code.

As more chassis were left in the port area, truck companies ran out of them. As a result, although the port was in 24/7 operation, the port’s cargo aging problem continued as the containers had not been transported away.

“Section 21.33.150 of Long Beach City’s Municipal Code was last updated in 1995,” according to the email from Torre. The zoning code set the 2-high limits for the cargos stored in the port, meaning max two levels of cargos can be stacked up together when stored.

After the max height was reached in all the storage areas inside the port, drivers were not able to return the empty containers back to the port. They then parked the chassis carrying the empty cargos around the port, and drove the cab away.

After identifying the core problems, Peterson tweeted out his findings on Oct. 22.

He also commented on the challenges facing the city as an experienced private CEO: “When you’re designing an operation you must choose your bottleneck. If the bottleneck appears somewhere that you didn’t choose it, you aren’t running an operation. It’s running you.”

Hours after Peterson sent out his tweet, the Long Beach city management enacted an emergency ordinance that allowed the containers to be stacked up to 4-high limits. The city council unanimously supported and approved the emergency ordinance in a later council meeting on Nov. 9.

California state Gov. Newsom issued an executive order on Oct. 20, which required all levels of the state government to help solve the supply chain-related issues. Following the governor’s order, Caltrans (California Transportation Department) lifted its 80,000 lbs truck weight limit until June 2022 in order to expedite the process of solving the supply chain crisis.

In his email response to The Epoch Times, Torre also stated that the city team has been in constant communications with neighborhood associations, business associations, and elected officials over the supply chain challenges, adding that city residents had an understanding of the need for emergency measures at that time.