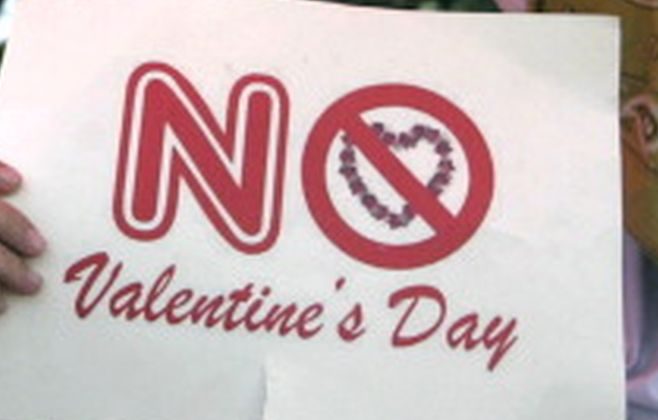 Valentine’s Day is squarely in the target of a group of Japanese men, part of the group “Kakuhido” (translation: “Revolutionary Alliance of Men that Women find Unattractive).

“The blood-soaked conspiracy of Valentine’s Day, driven by the oppressive chocolate capitalists, has arrived once again,” said Kakuhido on its website, according to The Daily Telegraph.

The men are planning a march for 90 minutes through Tokyo’s Shibuya district.

“In order to create a brighter future, we call for solidarity among our unloved comrades so that we may demonstrate in resolute opposition to Valentine’s Day and the romantic industrial complex,” the site added.

Organizers said the men will chant things like “Crush St Valentine’s Day!” and “Flirting is terrorism – wage war on terrorism!”

But as the Telegraph notes, the protesters will try to adhere to the demonstration laws in Japan and will comply with police.

“All the mass media does is dehumanize those who are not in love,” Katsuhiro Furusawa, an organizer, was quoted as saying by the paper. “It makes them worthless.”

As the Tokyo Reporter notes:

Kakuhido’s beliefs are misogynistic. At the 2013 event against marriage, Mark Water, the group’s leader at the time, explained his position to rousing cheers. “That housewives stay at home is unforgivable,” he said. “They control Japan’s direction from their homes!”

This, he argued, has negatively impacted Japan’s class of unpopular men. “Salarymen who struggle with women pay a premium for these women who stay at home. The special rights afforded housewives are unforgivable.”