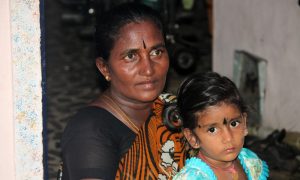 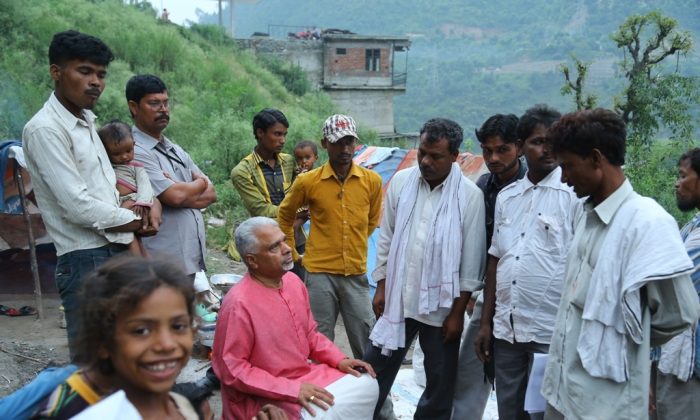 Lawyer, Activist Sarachandra Bose and a group of volunteers interact with villagers in central India while on travel around the country on 26 July 2014. Bose travelling around the country for 55-days campaigning against caste. (Special arrangement)
India

NEW DELHI—One lone man has put the Indian government on notice that it must eradicate caste from the Indian constitution by the end of the year, saying the system of social stratification based on birth, is a “curse” on the Indian nation.

Bose himself is from one of India’s privileged castes and has been a lawyer in Dubai for the last 30 years. He could have led a comfortable life, but instead has chosen to help the millions who face caste-based discrimination all over India.

Over the past three months he has traveled 8,700 miles talking to people around the country and distributing his book called “Caste Away, India, Hinduism and Untouchability”.

Bose’s exposure to caste started at a young age. When he was six or seven, he says he remembers the difference in treatment his father’s workers received due to their caste. A few got to eat inside, while the majority, who were “untouchables”, ate in the fields.

Each of these castes is divided into many sub-castes and within the same caste, certain sub-castes are higher or lower than other sub-castes.

Bose recalled a touching example of this after an earthquake in Gujarat, in western India where he was investigating the distribution of aid. The “untouchables” there told him, “Sir, cats and dogs can enter the houses of the people, but untouchables cannot.’

Bose calls this a basic human rights issue, which goes against the Universal Declaration of Human Rights, of which India was a founding signatory.

“The 1948 Universal Declaration of Human Rights by the United Nations must be in India, and a human being is to be treated as a human being and not as an animal in the caste system,” reads a handout made and distributed by Bose.

Caste forms a foundation for various positive discrimination policies in the Indian constitution. For example, affirmative action in schools ensures that lower castes receive an education and the constitution mandates that a certain percentage of seats in government institutions go to those in the lower castes. But Bose argues that, instead of using caste to categorize people, the constitution should divide people based on their economic status instead.

He believes that even the upper castes are fed up with the system and cites several Supreme Court cases that ruled in favor of abolishing caste.

When asked if he thinks this will happen in his lifetime, Bose said he is confident that the Indian government will respond to his notice.

“Why a lifetime, it’ll change before 31 of December 2014, why one lifetime?” Bose replied.