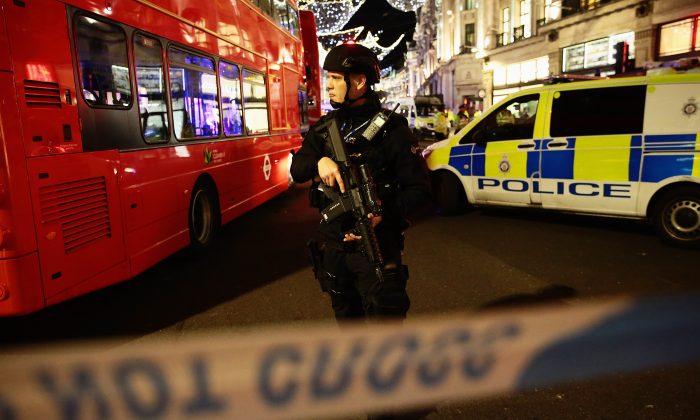 LONDON—London’s police force is considering arming officers on foot patrols in response to a rise in violent crime, a move that some think could be “seen as provocative.”

In all areas of the UK, apart from Northern Ireland, police officers don’t carry guns.

The suggestion to arm some of London’s Metropolitan Police was made by Commissioner Cressida Dick in an email seen by the BBC. She said they would only be used in areas “where gang activity is likely,” and just for “short periods of time.”

The idea of armed police on foot patrol was part of a “recent internal discussion” on measures to reduce the spate of violent deaths in London, according to the email.

So far in 2018, the number of violent deaths in London has surpassed those from the whole of 2017.

The email stressed that armed police would only be deployed “based on an informed and reliable intelligence picture of where gang activity is likely” and in “full consultation with the local policing borough.”

At a Q&A session for the London Assembly, an organization that exists to hold the London mayor to account, Dick said arming patrolling police would just be “half a step on” from the current situation, and would be a “small change in tactic in extreme circumstances.”

At the same session, Assistant Commissioner Stephen House said police were attempting to “get ahead of the violence” and that the consultation was at the “very early stages.”

Later, he released a statement, saying: “We are not considering routine deployments of armed officers in our communities.

“As part of our response to the increase in violent crime in London, we are examining how our armed officers can provide extra support and augment other units, either in response to a serious assault or to be deployed to areas where we have intelligence that serious violence is imminent.

“Any deployments would be for a limited time only and done in consultation with local policing commanders, and after a community impact assessment had been carried out.”

‘It Would Be Seen As Provocative’

However, Lord Philip Harris told a parliamentary debate on the rise of violent crime that he isn’t convinced arming patrolling officers would be helpful.

“It would be seen as provocative,” he said. “It will inspire fear rather than reassurance. It will hinder community confidence and do little in itself to reduce the number of violent incidents.”

Harris emphasized that violent crime had risen at the same time as funding for Britain’s police had been cut.

“The number of police officers in England and Wales has fallen by 20,000 since March 2010 and is now at its lowest recorded level since the early 1980s,” he said.

“These cuts and pressures are not surprisingly leading to a purely reactive service … so gangs feel they can operate on our streets with impunity,” he added.

Interior Minister Sajid Javid recently said he was “deeply worried” about the surge in violence and said he’s in talks with the British chancellor to allocate the police more funding.

The routine arming of police has long been a controversial issue in the UK, with a 2017 survey by the Police Federation showing that two-thirds of police are against it. Just over 40 percent instead called for more training on the issue.

However, the Met Police do have about 7,000 specialist firearms officers, but they are deployed only to specific situations and not routinely.

The Police Federation’s firearms lead, Che Donald, said in a 2017 blog piece that, “We are currently insufficiently financed, equipped, and resourced. … Now is the time we should be having a mature conversation about how we continue to police in the face of an ‘ever-evolving threat’.”