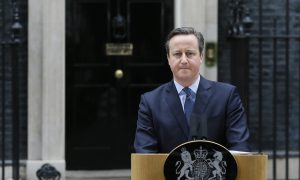 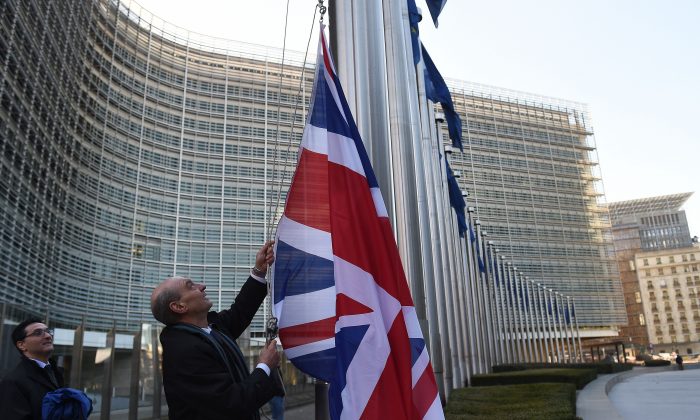 The British flag is hoisted ahead of British Prime Minister visit at the European Commission in Brussels, on February 16, 2016 (Emmanuel Dunand/AFP/Getty Images)
UK

Faced with the possibility of Britain leaving the European Union, London’s EU workers feel “depressed” and fearful of their place in the UK as the debate affecting their future swirls around them.

If Britain votes to leave the EU in a referendum expected to take place in June, the 3 million EU citizens from other countries living in Britain will be at the forefront of what happens next.

Will they need a visa? A work permit? Have to reach a points or salary barrier in order to stay? Pack their bags and leave?

It is difficult to predict consequences and the government says it is not planning for the possibility of a British EU exit.

But “uncertainty is very unpleasant”, said Roch Glowacki, 24, a trainee lawyer from Poland.

He came to London as a student in 2010 and saw his future in Britain, but is now worried.

“The consequences of ‘Brexit’ could mean I will want to, or have to, leave,” he said, adding that London might lose its prestige outside the EU.

As insurance, he and others like him are considering taking up British nationality. People who have lived in the kingdom for five years can now apply, though the process is getting harder.

The £1,005 cost has put Samuel Schwarzkopf off doing it so far but the German neuroscientist at University College London said he is also considering applying for a passport.

“My primary reason for it would be to be allowed to vote in the referendum,” he said.

Only British, Irish, and Commonwealth citizens over 18 who are resident in Britain, along with British nationals who have lived abroad for less than 15 years, can vote in the referendum.

“I am not very concerned about my own future in the UK but the possible exit from the EU will definitely have bad consequences for my work, and my students and colleagues from EU countries,” Schwarzkopf said.

There has been no sign yet in the official statistics of a rush to citizenship but Anna Morris, managing director of immigration law firm DavidsonMorris, said: “Since Christmas the phone has not stopped ringing. I’m not joking, it’s crazy.

“Immigration is a hot topic and people are fearful.”

Anna Gat, a 32-year-old Hungarian screenwriter, said she was “very depressed” at the prospect of Britain’s exit.

“Brexit sounds like a really bad idea, but bad ideas seem to be very popular today,” said Gat, who arrived from Budapest in 2013.

Carmen Martinez, 42, also appreciates the open spirit of the British.

After 10 years working at the justice ministry in Spain, she is now a nanny.

“If they leave, it’s going to be chaos, a disaster, especially for jobs British people don’t want to do,” she said.

“If people come here, it’s for the jobs.”

Part of Prime Minister David Cameron’s attempt at renegotiating Britain’s EU terms of membership is a ban on EU migrants claiming welfare for their first four years in the UK.

“It’s not fair at all,” said Lukasz Ferenc, a 26-year-old advertising agency production administrator who arrived from Poland six months ago.

“EU migrants paid in taxes a lot more than they received back in benefits.”

Nonetheless, he said he understood British concerns about immigration.

“The place is overcrowded and it’s pushed to the limits,” he said, citing pressure on the health service, housing, and the transport system.

Ferenc said it was time for a “closer look” at immigration.

“I support Brexit and I’m not afraid,” he said, citing the EU’s “gigantic costs and huge bureaucracy”.

“Each country should be able to decide who can cross their borders,” he added.

As for the benefits freeze, “hopefully it will stop the welfare claimants from coming here and British people will appreciate immigrants more”.

For Martinez, the referendum “hides an immigration question” over the number of foreigners streaming into Britain.

“My contract expires in July. If they decide to leave in June, I will probably leave,” she said.

“This is a good country but it’s not the only one in the world.”