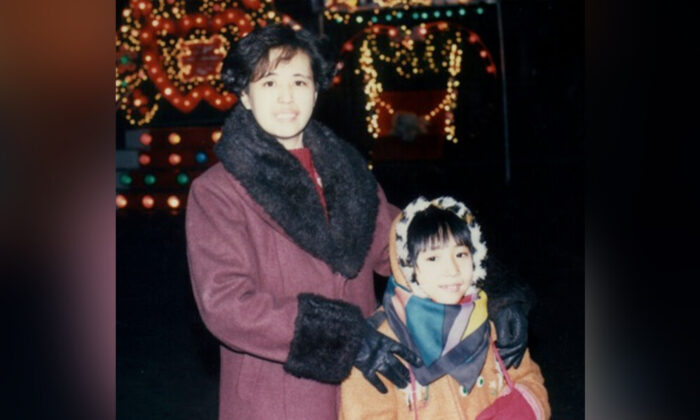 Amy Yu and her mother. The background is the Chinese character “love”. This is the only picture that remains after the police took all the family's belongings (Amy Yu)
China Human Rights

Amy Yu had never heard of the notorious “tiger bench” before she visited the detention center where her father was being held.

Just 15 at the time, she asked her mother what the large, odd-looking bench was.

“She told me it was a ‘tiger bench’ used for torturing people,” says Amy. “There were also various forms of iron tools which hung on the wall. Some were sharp, and some had hooks on the top. They were all torture instruments, I was told later.”

Twelve years on, and Amy, now 26, is only too familiar with the ways in which the Chinese authorities handle those who fall out of favor.

Her father, who has now spent over a decade in a prison in Heilongjiang Province province, China, is crippled from a broken leg, at times half-blind, suffers spells of dizziness, and has lost most of his teeth. His hands, the only part of his body that are exposed to the eyes of visitors, are full of scars, Amy says.

It is only now that she lives in London that Amy feels she has a chance to start campaigning for his release.

But as Amy campaigns, she can no longer turn to her mother for comfort or answers, for she too has been imprisoned for the last nine years.

Amy, a graduate of fashion design from the Cambridge School of Art, now a resident of Edmonton, says the reason her family has been illegally persecuted by the state is because of their spiritual beliefs.

Her parents both practice Falun Gong, also known as Falun Dafa, a Chinese spiritual practice that has been persecuted by the Chinese Communist Party since 1999.

“I am afraid he will not hold on till he returns home,” says Amy, as she describes the last time she saw her father. “I found him very tired. He is actually a very strong person, I had never seen that look before on his face. I fear his hope has been torn away.

“My family has been shattered. Even as my parents were kept in detention, the police still harassed me and took our belongings away from home. During these years I have witnessed much of the dark side of China.”

Her MP Frank Dobson has written to the Foreign Office about the plight of her father. The response of the Foreign Office was to reiterate the fact that it regularly raises human rights issues with the Chinese authorities through Human Rights Dialogue meetings.

Amy says that her local councilor, Bambos Charalambous, has been supportive, and she has managed to get some local news coverage. She says she needs to do more to raise the profile of her father’s case.

Her father, Zonghai Yu, was a painter at the Mudanjiang City Library. He was sentenced without a proper trial and no legal representation to 15 years in Mudanjiang Prison in 2001 after being caught hanging banners proclaiming “Falun Dafa is good!” around his city.

Mudanjiang Prison is nicknamed the “death concentration camp” according to Minghui.org, a website that has been documenting the persecution of Falun Gong since 1999.

According to the website, prisoners work every day for 11 hours, making chopsticks.

A report on Minghui.net states: “The ‘sanitary’ chopsticks produced by Mudanjiang Prison are not only supplied to the city, but are also exported to Japan. These products take with them severe virus and bacteria contamination. The prisoners often do not wash their faces for 10 to 20 days.”

Once a prisoner left a small note with the chopsticks revealing the truth about their production and unsanitary nature.

“When the examiner discovered it and found out who did it, the guards beat that prisoner with electric batons and wooden clubs until he was almost dead,” says the report. “He was carried to the hospital and left there without any treatment. Several days later he died.”

Minghui.org estimates that there are around 100 Falun Gong practitioners imprisoned in the prison. Thirteen are known to have died there since 1999.

I Fear His Hope Has Been Torn Away

Amy is worried that her father might not survive until the end of his sentence in 2016.

Yu was once a strong, healthy individual. Amy says he attributed his health and vigor to the daily practice of the Falun Gong exercises, which he said had cured him of a major hip problem.

The last time Amy tried to visit him in 2010 the authorities blocked her for several months.

“When I visited him, his leg had been broken. My dad told me that his chest was beaten seriously by electric batons, and now it feels hard to breathe. In the past, he had a very healthy heart, but now he has a serious heart problem. His head was hit by something heavy, and now he often feels dizzy.”

He had already had most of his teeth broken from regular beatings, and back in 2006 his tear duct was torn and has never been treated, sometimes leaving him half-blind from swelling.

Amy’s mother, Wang Meihong, was a senior engineer in a geological institute. She was sentenced on October 25th, 2003, to 11 years in prison for distributing flyers and CDs to raise awareness about the plight of Falun Gong in China.

Amy still remembers the night her mother was taken. “The police took my mother and me to the center of the police office. When we got there, the police argued with my mum, said she was a Falun Gong practitioner.

“Then they pointed at me, said, ‘This girl’s parents are both Falun Gong practitioners, she must be bad’.”

They threw a picture of Li Hongzhi, the founder of Falun Gong, onto the floor, and asked Amy to step on it.

“They saw me hesitate and shouted at me, ‘See, she is a Falun Gong practitioner too, lock her up too!’ I was frightened, and my mother pushed me out of the door, saying, ‘She is just a kid, let her go’. She said to me, ‘Go back home baobao [baby]—run!’

“I ran away crying. I didn’t know where I could go—my home was empty, as my father had already been arrested. I called my best friend and asked to stay the night with her.”

But Amy’s primary focus right now is on her father due to his critical health and the conditions he is subject to, she explains.

“Despite his poor health, his prison still forces him to do slave work. Our family members have requested a thorough health examination and medical treatment for him outside of the prison. The prison administration had agreed verbally. But three years later it has still not happened.

“Three months ago, due to his very critical health condition, the court had intended to release my dad on the condition that he renounces Falun Gong.” Her father refused and was left to endure the rest of his 15-year sentence.