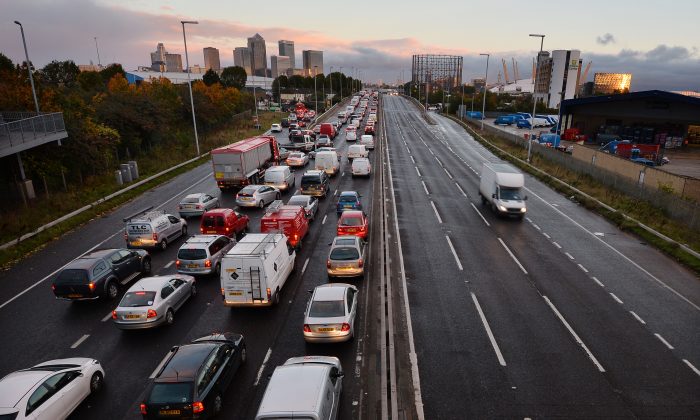 Traffic on a main route into London by the towers of the financial district Canary Wharf on Oct. 28, 2013. (Ben Stansall/AFP/Getty Images)
UK

LONDON—London’s emission rules are about to become stricter as older cars face a higher daily charge upon entering central London.

The mayor of London, Sadiq Khan, has called the city’s air a public health crisis and is enforcing the new rules in order to lower nitrogen oxide emissions and fine particulate matter, both of which can be toxic to human health.

But some said the mayor’s method of taxing motorists in hopes of improving air quality doesn’t add up and are concerned that the new regulations could drive many small companies out of business.

What Is the Ultra-Low Emission Zone?

It’s been billed by the mayor as “the tightest emission standard adopted in the world.”

In April, drivers of older, noncompliant cars, vans, and motorcycles will pay 12.50 pounds ($16) every day, on top of the already existing 11.50 pounds ($15) congestion charge to drive in the Ultra-Low Emission Zone (ULEZ).

It covers the same area as the existing Congestion Charge Zone.

Buses, coaches, and trucks that don’t meet the emission standards will be charged 100 pounds ($130) per day to enter the zone. The charge applies 24 hours a day, 365 days a year.

It will replace the already existing toxicity charge, a 10 pounds ($13) daily charge, which was introduced to the capital in October 2017.

Some vehicles such as black cabs that have new emission standards are exempt. Uber cars are not exempt from the scheme.

Emergency service vehicles are not exempt either, but they won’t be charged if they are entering the zone during an emergency, a spokesperson from Transport for London said. He added that they are helping emergency services upgrade their fleet.

By 2021, the Ultra-Low Emission Zone will expand to the North and South Circulars, which are roads that ring the majority of the city.

The mayor said the air in London leads to thousands of premature deaths in the capital each year.

Pauline Castres from the British Lung Foundation said the charge is a price worth paying for people’s health.

“NO2 levels are harmful but they are also illegal, and we should have met NO2 levels back in 2010. So I think the objective of the ULEZ is really to reduce levels so they are below the legal limit,” said Castres.

“The emergency here is really to make sure we have less-polluting cars on the roads. These [newer] diesel cars are not perfect but they are a bit less polluting,” she said. “It’s part of the solution.”

Castres noted that fine particulate matter—particles invisible to the human eye that can accumulate in the lungs and be harmful to humans—can come from a variety of sources.

“They are emitted by a wide range of sources so you have industrial emissions, construction sites, also brake and tire wear on the roads, and wood burning stoves as well,” she said.

Khan predicted a 45-percent fall in harmful emissions after enforcing the charge.

Under the last Labour government, diesel cars were promoted as being environmentally friendly with lower CO2 emissions, but those cars have since been found to have high nitrogen oxide emissions.

“It’s the older diesel cars that the previous Labour government was ironically pushing everyone to buy at the turn of the century, these are the cars that are going to be most adversely impacted,” said leader of the Conservatives in the London Assembly, Gareth Bacon.

He added, “The business implications could be very shocking. For a start, the market in second-hand vehicles could be completely destroyed, but also it means that poorer people are going to have less access to transport.”

He described the charge as Khan’s “poll tax,” in reference to a flat rate tax introduced by Margaret Thatcher in 1989, a policy which contributed to her downfall as a leader.

Driven Out of Business

Sarah King of The Federation of Small Businesses said many businesses are concerned about the impact the daily charge will have on their trade. Small businesses make up 99.2 percent of all businesses in London.

“The cost of bringing those vehicles into London. If it’s a lorry, it’s about a hundred pounds a day, weekly coming into London, that’s going to be 700 pounds a week extra to their business cost.

“Many of the smaller businesses are trying to compete with their larger competitors, and it could actually drive many out of business; obviously we don’t want to see that,” she said.

Small businesses are calling for more time, and ask for a three-month transition period to find alternative vehicles, before they start getting charged.

They also ask for a 12-month transition period for those who have a leases that run up to April 2020, which was the Ultra-Low Emission Zone’s original launch date.

In December 2018, the mayor announced a scrappage scheme for vans to help small business owners switch to less polluting cars.

“We all want clean air. Every single driver wants clean air for their families. Don’t think that just by taxing them off the planet that will improve our air quality, it simply won’t,” he said.

“People who drive a very old car, they can’t afford to buy a brand new clean car. Even a Honda C90, those little motorbikes, they’re going to be charged for this.”

He added, “They can only push us so far, and if they continue, certainly if they put up fuel duty, and they continue on this approach with the Ultra-Low Emission Zone, we’ll be looking at much more—I wouldn’t say violent protests—but I’ll say, you’ll notice us.”