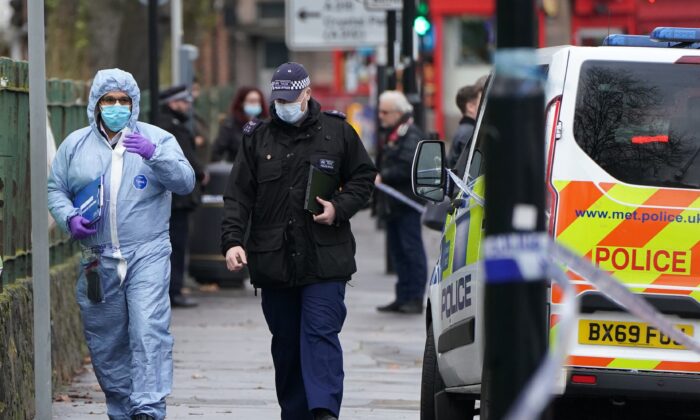 Police activity at Ashburton Park, Croydon, south London after a 15-year-old boy was stabbed to death on Dec. 30, 2021. (PA)
UK

Two boys were stabbed to death in separate incidents in London on Dec. 30, making 2021 the bloodiest year on record for teenage homicides in the British capital.

A 15-year-old boy was fatally stabbed in Ashburton Park, Croydon, south London, and was pronounced dead at 7.36 p.m.

Less than an hour later, a 16-year-old boy was pronounced dead at 8.25 p.m. after being fatally wounded at Philpot’s Farm, Yiewsley, west London.

The two deaths bring the total number of teenage killings in London in 2021 to 30, breaking the previous record of 29, which was set in 2008.

London Mayor Sadiq Khan said he was “devastated” by the double tragedy. “I refuse to accept that the loss of young lives is inevitable and will continue to be relentless in taking the bold action needed to put an end to violence in our city,” he said.

The Metropolitan Police has not named either of the victims, and said no arrests have been made.

Police Commander Alex Murray, who was at the scene in Croydon, called on parents to talk with their children about the impact of carrying weapons.

He added: “This is what happens when knives are carried and we all have a role in relation to tackling knife crime.”

“Knife crime is accepted by this generation as part-and-parcel of growing up and that’s completely unacceptable,” he said, adding, “It is a societal problem which will continue unless it is addressed properly.”

Anthony King, chairman of the MyEnds programme which aims to tackle knife crime in London, said there has been “a lot of breakdowns” in schools and in families.

“Parents—if you see a bread knife or bun knife missing from the home, please speak to somebody, please contact an agency or an organisation and let the teachers know,” he said.

Scotland Yard said police were called to the Croydon stabbing shortly after 7 p.m. They gave first aid to the boy before the ambulance arrived but he was pronounced dead a short time later.

Police were called to the stabbing in Yiewsley shortly after 7.30 p.m., where they found the 16-year-old victim suffering from a puncture wound. He was declared dead at the scene.