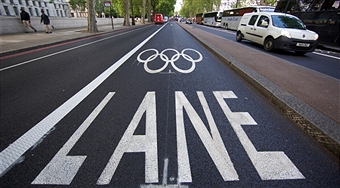 The Olympic Route Network (ORN) are dedicated lanes around London for athletes and officials to travel between competition sites. (Andrew Cowie/AFP/Getty Images)
US

With the Olympic opening ceremony taking place this Friday, years of transport preparations for the games are about to be put to the test.

Games Lanes have been introduced as well as adjustments to 1,300 sets of traffic signals and parking bays. Barriers for restricted turns have been installed and junctions simplified. Drivers face a hefty fine of £130 for driving in Games Lanes or stopping along the route.

A whole range of measures have been developed to try to cope with the demand and ensure things run smoothly. All host cities are required to have an Olympic Route Network (ORN) to ensure athletes and officials get to venues on time.

Confusion over the new road markings and banned turns has already led to congestion in the city this week and there are fears that disruption will escalate once the Olympics-only lanes are activated and the main influx of visitors is at its peak.

The prime minister’s official spokesman said in a statement: “We have huge numbers of people coming to London to enjoy the games and that is going to put huge pressure on the transport system. There is going to be disruption and there is going to be an impact on travel times.”

The government is keen to highlight the major infrastructure projects it has developed in conjunction with the London Organising Committee of the Olympic Games (LOCOG) and transport operators.

These include the key transport interchange at Stratford station – the gateway to the games – which now has a more than three-fold passenger capacity and can cater for around 240,000 people an hour. A £150 million investment has seen improvements including new ticket halls, entrances, subways, concourses, lifts, and platforms.

The London 2012 Games is also committed to being the most accessible games held to date.

The London 2012 Accessible Transport Strategy has made improvements to help disabled people use public transport during and after the games.

Boosting London 2012’s green credentials, £10 million has been invested in better walking and cycling routes serving the Olympic Park and other venues. All of these improvements will leave a lasting legacy for Londoners.

The extent of the travel disruption for Londoners and visitors remains to be seen. Despite the best laid infrastructure plans there are less predictable eventualities that have the potential to cause major problems.

Members of the Public and Commercial Services (PCS) union have voted for a one-day strike on Thursday, July 26th, with a work-to-rule and overtime ban for the rest of the Olympic period.

The PCS leadership says the strike is necessary to protest against thousands of job cuts, eroded pay and working conditions.

Thursday is forecast by Heathrow as the peak arrival day for sponsors and international media, and it is feared that strike action will lead to long delays. The planned action involves Home Office staff and 5,500 in the Border Agency, and has been vigorously condemned by both main political party leaders.

A Home Office spokesman said by email: “We want the PCS leadership to call off this irresponsible strike. We ask members not to walk out at a time when the eyes of the world are on the UK and thousands of overseas visitors are arriving at the border.”

Contingency plans are in place, the spokesman said. “We have proven that we are capable of running a safe and secure border during the busy Olympic period and during industrial action and we are confident of doing so again if the union refuses to call off the strike.

“Staff from across government including from the Home Office, MOD police and seconded police officers have been trained to work at the border. Those who have not already volunteered specifically for the Olympics are being asked to offer their support on 26 July.”

The Home Office is seeking a High Court injunction to prevent border staff taking strike action on Thursday. There may have been a “procedural error” in the PCS ballot.

How things will work out in one of the busiest capitals in the world remains to be seen.