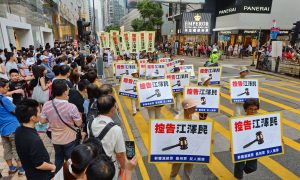 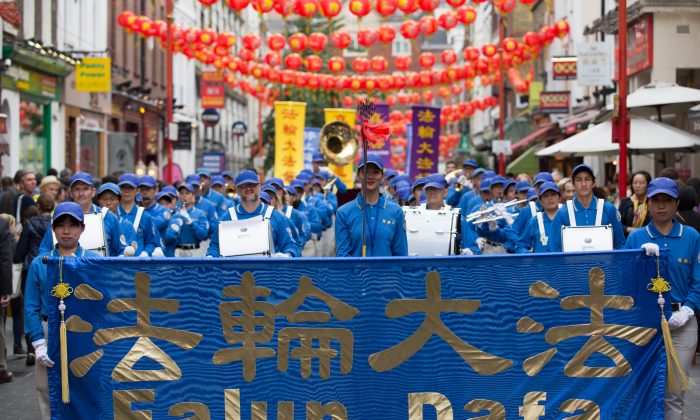 Just ahead of Chinese leader Xi Jinping’s state visit to the United Kingdom, a march was held in London on Oct. 10. It reminded onlookers of China’s continuing human rights abuses and how its citizens are fighting for justice.

Every year in China thousands of innocent people are jailed and tortured. Many are killed for their organs to supply the country’s transplant business. The majority of these are Falun Gong practitioners.

Saturday’s event was organized by Falun Gong practitioners in the U.K. Starting at the Chinese Embassy in central London, the march, headed by a 70-strong band and followed by another 125 people holding banners, placards, and plaques commemorating those who have died in Chinese jails, passed through Oxford Circus, Piccadilly Circus, and Chinatown, and ended in Trafalgar Square.

“We are here today to publicize the fact that the persecution of Falun Gong is still going on,” explained John Dee, vice chair of Friends of Falun Gong Europe, a nonprofit organization that supports the freedom of belief of people who practice Falun Gong. “We can’t simply trade with China and ignore this fact, yet a lot of politicians in the West are worried about annoying the Chinese government. We think human rights and economic issues should go hand in hand.”

Falun Gong was introduced in China in 1992 and for seven years was acclaimed and encouraged by the state for its beneficial effects on people’s health and well-being. It had 100 million followers. Then in 1999, the Chinese Communist Party leader Jiang Zemin, outlawed the practice. The arrests began and continue to this day.

Yet earlier this year people in China took the unprecedented step of filing criminal complaints against Jiang. They want him brought to justice for the violent persecution of Falun Gong. To date, more than 180,000 people, most of them in China, have filed lawsuits.

“I want to thank all of the Chinese people for their courage, for standing up and for honoring Falun Dafa and their true heritage,” said Maria Salzman, who took part in the parade. “The world is now looking at you.”

Originally from Poland, Salzman has practiced Falun Gong for 18 years. In 2002 on a trip to China to tell people that Falun Gong prevailed and was practiced widely outside the country, she was eventually detained, tortured, and expelled from China.

Over the years, the lies and propaganda she has heard about Falun Gong, and China’s demonization and criminalization of people, remind her of Poland during the Communist era. “They use the same stories, the same lines,” she said.

However, in a small step forward, Xi Jinping has imprisoned many of Jiang’s allies on corruption charges. And in an open letter to Xi published by Friends of Falun Gong in the New York Times on Sept. 28, the day of Xi’s address to the United Nations, an appeal was made to allow Falun Gong to be practiced freely in China.

Similar appeals will be made during the Xi Jinping’s visit to the U.K., which starts on Oct. 20.