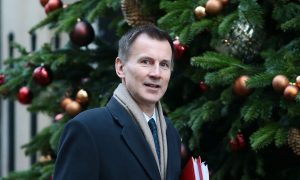 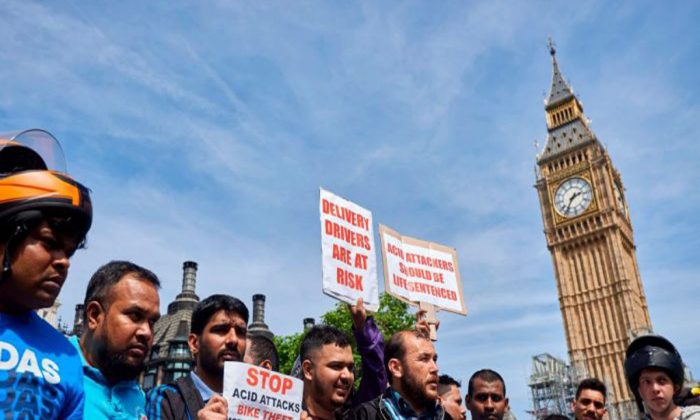 Acid attacks in London have surged to record levels, with over ten times more incidents reported last year compared with 2012, an investigation by the Evening Standard has found.

According to Metropolitan Police Freedom of Information figures obtained by the Standard, acid attacks in the city rose to 752 in 2018, up tenfold from 66 in 2012.

Of those attacks, 17 children under the age of 10 have been injured by the substance, statistics show.

Dr. Simon Harding, an expert on gangs and an associate professor in criminology at the University of West London, told the outlet that London has become the acid attack hotspot of the western world.

He explained that attacks using the substance are on the rise as acid is readily available, inexpensive and can be used by criminals in a variety of situations, including religious or racially motivated attacks.

“The rise in these attacks relate to a surge in knife crime in 2017 and 2018,” Harding told the Standard.

“Carrying bleach moved away from being a weapon of last resort, where it was used to target someone you truly hated.”

Harding added that the substance has become a “weapon of first resort” for some.

“It can be used in robberies, burglaries, revenge attacks, during thefts of mopeds or to intimidate witnesses.”

An acid attack victim, Jabed Hussain, 36, whose face was sprayed by the corrosive substance in Hackney in 2017, called for authorities to do more to protect the public against criminals abusing the liquid.

The former delivery driver was attacked by two individuals who attempted to steal his bike, reported the Standard.

“More needs to be done. The legislation is feeble and the criminals are smarter than the law.”

Amid the surge of acid attacks in the capital, it became illegal in November last year for the public to possess sulphuric acid with a concentration above 15 percent without a license, and now carries unlimited fines and a two-year prison sentence.

In addition, individuals under the age of 18 will no longer be able to purchase the corrosive liquid when the Provisions in the Offensive Weapons Act 2019 is implemented.

“The [2019] Act will also give extra powers to police to stop and search those they suspect of carrying acid,” the Home Office said.

Detective Superintendent Mike West told the Standard: “We will not tolerate any violent attack, including those using a corrosive substance, which we treat with an equal response to that of knife and gun crime.”

Innocent-looking beverage bottles, filled with acid or other dangerous liquids by criminals, have become increasingly used as weapons on UK streets.

But now, police will have the power to search people carrying plastic bottles and test them on the spot under new government proposals that will strengthen so-called stop-and-search powers to include “corrosive substances.”

The UK has one of the highest rates of acid attacks in the world, driven in part by gangs who are trying to build fearsome reputations while avoiding the legal penalty of being caught with a knife.

A testing kit to identify corrosive substances on the spot during a stop-and-search incident is being developed at the secretive Defense Science and Technology Laboratory, Britain’s interior ministry announced on Sept. 9.

Carrying those substances will be banned under a law currently passing through lawmaking chambers that will make throwing acid a crime in its own right.

Harding said stop-and-search may help reduce attacks by those who “casually” carry acid as an alternative to a knife for protection.

“But those carrying out acid attacks are often a certain type of individual who is motivated by something very powerful—usually some form of revenge,” he said.

In April, 2017, 18 people were burned and two blinded in one eye in an acid attack in a London club, when the former boyfriend of a reality TV star was arrested and charged.

Three-quarters of acid attacks known to UK police are never prosecuted because many victims are too frightened to give evidence.