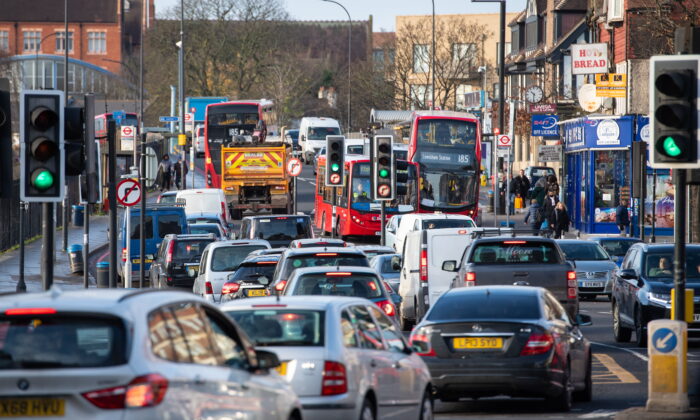 London needs to charge motorists by the mile to hit climate change targets, according to Mayor Sadiq Khan.

He wants road pricing to be implemented to encourage people who drive petrol or diesel cars in the capital to switch to public transport, walking, cycling or electric vehicles “where necessary”.

The Labour mayor said he is “not willing to put off action”.

Research commissioned by Khan found that a 27 percent reduction in London’s car traffic is required by 2030 to meet net-zero ambitions.

Road user charging would be a “simple and fair scheme” that could replace existing fees such as the Congestion Charge and Ultra Low Emission Zone (Ulez), according to the report.

But making people pay based on how far they drive has often been viewed as politically toxic.

Consideration of such a scheme has not been government policy since the then-Labour administration abandoned proposals in 2007 after an online petition attracted 1.8 million signatures.

The City Hall document noted that the technology to charge drivers per mile is “still years away from being ready”, so Khan is considering several policies which “could be ready within the next few years”.

One approach is for the Ulez to be extended beyond the North and South Circular Roads to cover the whole of London.

Existing charge levels and emissions standards could be maintained, or a “small” fee could be charged for “all but the cleanest vehicles”.

Khan is also considering charging drivers of vehicles registered outside London for entering the capital.

The Mayor and Transport for London will conduct a public consultation on the proposals.

Khan said he wants “an earnest conversation with Londoners”.

The chosen measure could be implemented by May 2024.

Khan said he is “not willing to stand by and wait when there’s more we can do in London that could make a big difference”.

AA president Edmund King said simply “charging vehicles off the road” is not the solution to cutting pollution.

“We need to encourage the uptake of cleaner, greener vehicles,” he added.

Consultancy Element Energy was commissioned by the mayor to set out scenarios for cutting London’s carbon emissions to zero overall—known as net zero.

The most ambitious scenario, Khan’s preferred option, could require £75 billion investment between now and 2030 in infrastructure, and more beyond, from public and private sources, according to the mayor.