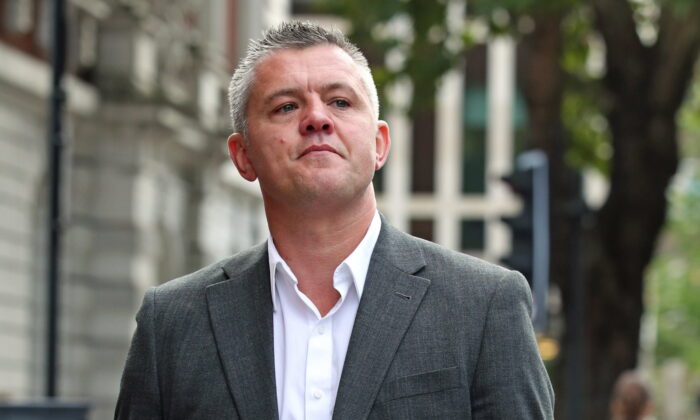 A 49-year-old man is given a suspended sentence on Wednesday over a video he shared online mocking a London blaze that consumed more than 70 lives.

Paul Bussetti, from Sundial Avenue in Croydon, south London, filmed the footage at an annual bonfire party hosted by a friend in November 2018, showing people laughing and jeering while a cardboard model of Grenfell Tower with cutouts of people on it being burned. A similar video was made by another individual, and it wasn’t clear which video Bussetti had uploaded to two private WhatsApp groups. The video subsequently went viral online and ended up on national TV, prompting public outrage.

Appearing at Westminster Magistrates’ Court on Wednesday, Bussetti was given a 10-week jail sentence, suspended for two years, after pleading guilty to one account of sending a grossly offensive video. He was also sentenced to 120 hours of unpaid work and ordered t0 pay £1,128 ($1,480) in court fees and victim surcharge.

Under the UK’s Communications Act 2003, it’s an offence to send “by means of a public electronic communications network a message or other matter that is grossly offensive or of an indecent, obscene, or menacing character.”

The Grenfell Tower went up in flames on June 14, 2017, following a fridge-freezer malfunction. More than 70 people were killed in the accident, making it the worst residential fire in the UK since World War II.

Sentencing Bussetti, Chief magistrate Paul Goldspring said he was “horrified” when he saw the video.

“It was disgusting, it was disrespectful, it was abhorrent and it was—by the nature of the charge—grossly offensive,” he said, adding that he suspects the video was “offensive to almost everybody who has an ounce of decency about them.”

Goldspring also said it had struck him that “not one person at that party seemed remotely upset or outraged or embarrassed” by what he said were “racist remarks” in the video.

“Bussetti handed himself into police and claimed the video was a ‘sick joke.’ I am sure it is beyond most people how something so appalling could be considered any kind of joke and that is clear from his conviction today,” he said.

Bussetti, through his lawyer, said it was not his intention to cause offence, but rather to mock his own friends privately.

The Metropolitan police said the bonfire party was attended by about 20 people, each was asked to make a guy to be burnt on the fire.

The video, which Bussetti sent to two private WhatsApp groups, was “placed on wider social media channels by someone unknown,” the Met said.

The court heard that Bussetti handed himself into the police when the footage went viral, saying, “It was all over the telly and so we thought it was better to tell the truth.”

He was said to have told the police that the video was “terrible, definitely offensive to people, it was just complete stupidness, one of those stupid moments.”