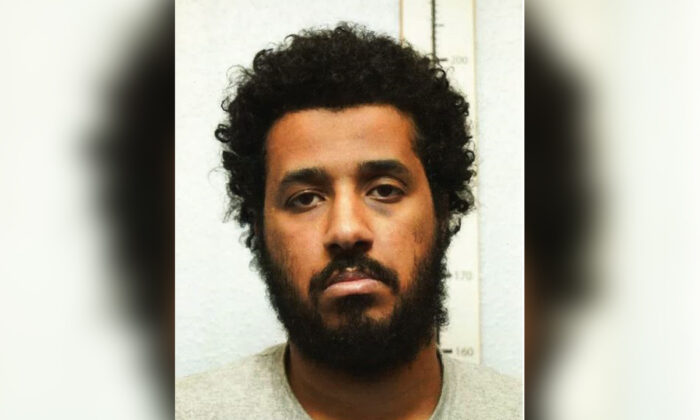 An undated photo of Sahayb Abu, who was jailed for planning to commit a terrorist attack. (Metropolitan Police)
UK

A man from east London was jailed on Tuesday for planning to commit a terrorist attack, the Metropolitan Police said.

Sahayb Aweys Munye Abu, a 27-year-old wanna-be rapper, was sentenced at the Central Criminal Court of England and Wales to life imprisonment, with a minimum term of 19 years.

A jury found Abu to be guilty of preparation of terrorist acts by an 11–1 majority verdict on March 12.

Four of Abu’s half-siblings were previously found to be involved in ISIS.

His younger half-brothers, Wail and Suleyman Aweys were killed after they left the UK to fight with the ISIS terrorist group in Syria in 2015. His older half-brother Ahmed Aweys, older half-sister Asma Aweys and her partner Abdulaziz Abu Munye were jailed in 2019 for terrorism-related offences including sharing ISIS material in a family chat group, in which Asma Aweys called singer Ariana Grande “the devil” after her concert at the Manchester Arena were targeted by a terrorist attack.

Abu was arrested on July 9, 2020 after he ordered weapons, equipment, and clothing online to prepare for an attack.

He posted a message in a chat group on the same day, saying “we need a 9/11 2.0,” referring to the terrorist attack on Sept. 11, 2001, when four planes hijacked by al-Qaeda terrorists crashed into the World Trade Center, the Pentagon, and a field in Pennsylvania, the United States, killing thousands.

The Met said that MI5 and police had been investigating Abu since March 2020 after “concerns were raised about Abu’s extremist mindset.”

“Over several weeks in May and June 2020, Abu made enquiries about and purchased a number of items that gave investigators cause for further concern—a lock knife, a ballistic vest, two balaclavas, fingerless gloves, a camo-print fisherman’s hat with face and neck cover, and finally a large sword which he asked to be sharpened,” the Met said in a statement.

According to The Telegraph, the sword is 18-inch long.

Abu also spoke about obtaining firearms during conversations with an undercover officer, who befriended him online and met him twice in person.

After analysing his electronic devices, police found that Abu had visited websites about ISIS and had downloaded ISIS propaganda and other extremist content.

Police also found videos of him reciting “lyrics which reflected his extremist views.”

“In one song, he refers to himself as a ‘straight ISIS supporter,’ talks about ‘heads rolling on the ground,’ and says ‘got my suicide vest, one-click boom and I’ll see you later,'” the Met said.

Abu told the jury that he purchased the items for parody rap music videos.

Abu had two previous convictions for battery and one for possessing a knife, but no previous terrorism-related convictions.

Until March 2020, he was serving a prison sentence.

Judge Mark Dennis QC told Abu that he should have known better after seeing what happened to his family members.

“You of all people, having seen what befell your two younger brothers when they signed up to join [ISIS] in 2015 and having seen the course other members of your family have taken … resulting in prison sentences, should have made you, at the mature age of 27, turn your back on the violent extremist cause.”

“The recent easing of coronavirus restrictions means that people will start going out more in public—to see family and friends, to shop, and to visit places,” he said.

“The threat from terrorism has not gone away and we would urge people to remain vigilant and act if they see anything suspicious by reporting it to the police. You won’t be wasting police time. The public has a key role to play in helping the police tackle terrorism and save lives.”