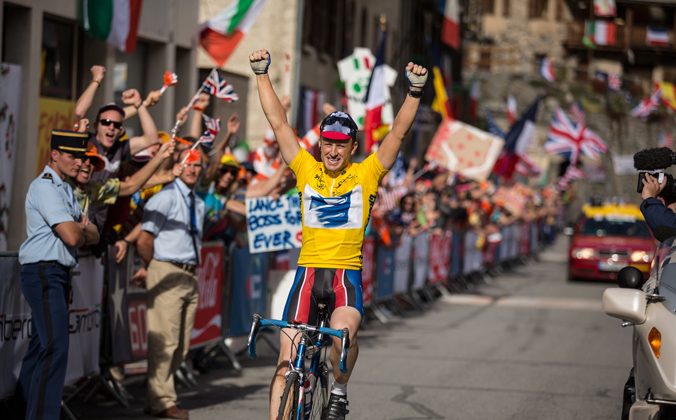 “The Program” arrives on the heels of Alex Gibney’s 2013 documentary “The Armstrong Lie” hoping to inject (pun intended) some dramatics into this intriguing story. For the most part it’s an uphill struggle.

David Walsh (Chris O’Dowd) is a sports journalist who crosses paths with a young Lance Armstrong (Ben Foster), finding him personable and talented, but not a good enough cyclist to ever win the Tour De France. So imagine his surprise when the young American starts to excel at physical feats that weren’t in his genetic make-up, completely obliterating the competition in some of the most arduous cycling conditions imaginable. It stokes his journalistic fires, but to take on an iconic hero and cancer survivor he needs proof, something Armstrong and his team know all too well, always keeping ahead of governing bodies with blood transfusions and their unwavering denials of wrongdoing.

“The Program” is all surface level storytelling, rattling along with an incoherent structure and narrative timeline. It hops back and forth, and whizzes through certain events. Armstrong’s cancer appears early, there’s a hospital sequence, and then he’s back on the bike. The film works hard not to depict him as too much of a sympathetic character, but you never get beneath the skin of any of the major players, they’re simply doing a very good job of mimicry. We could have seen how Walsh’s determination to reveal the truth might have affected his family; instead he answers a series of phone calls whilst cooking for them to depict how “stressful” it was. Or how the masseuse (Laura Donnelly) becomes witness to the doping, and subsequently at the hearings; instead, she rubs his legs, smiles, and the next time we see her she’s giving a tell-all interview.

It’s all surface level storytelling, rattling along with an incoherent structure

Having said that, Chris O’ Dowd does a terrific job as Walsh, becoming the nearest thing to a rounded character in the hastily unspooled narrative. He probably shares the podium with Foster when it comes to acting plaudits.

For so long, Foster has been a character actor confined to untrustworthy ensemble roles. Here he retains the duplicitous nature, but embodies Armstrong in a film-consuming way. Padding around like a big cat when angered, perfecting the ticks and mannerisms during the now-infamous press conferences, and in one sequence where Armstrong has come third, begins tearing up, almost making you feel sorry for the fallen idol. If there is a reason to get in the saddle, then it’s Foster’s turn, one you hope rises above the film’s shortcomings to receive the recognition it deserves.

Frears’ direction is, like a number of skewiff camera angles he continuously employs, a little off-kilter. The chance to recreate the speed and intensity of a road race, or the torturous nature of a mountain climb, are completely passed up in favour of the kind of weightless simulations that hinder sports biopics.

“The Program” provides less insight than Alex Gibney’s investigation, and is a genteel ride through the countryside in comparison. Were it not for the performances of Foster and O’Dowd, you’d feel Armstrong had cheated you all over again.