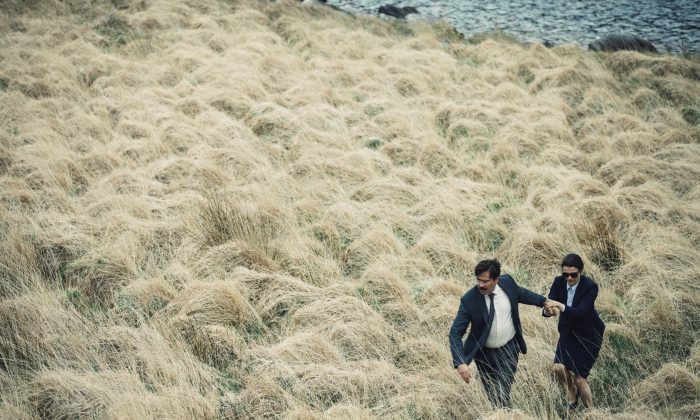 From the moment a twitchy countryside drive through the drab vistas of an unspecified location ends with a woman executing a donkey with a pistol, you know you’re about to be exposed to something wholly distinctive.

Sometime in the future, maybe, single people are cast from society and given 45 days’ stay in a hotel. Here they must find a suitable partner, and if they don’t then they’re transformed into an animal of their choosing to live out the remainder of their days. It is because of these rules that you won’t find the image of a camel strolling through woodland too much of a stretch, considering what the fertile Greek minds of Yorgos Lanthimos and Efthymis Filippou have thrown at you for two hours.

David (Colin Farrell) has arrived at the hotel with his brother, who himself failed to find a partner, so is now a dog. He is a schlubby man born of the term “dead-pan”, much like the rest of the characters, frittering his days away, unable to find a connection with nose-bleed lady (Jessica Barden), Biscuit Woman (Ashley Jensen), or Heartless Woman (Angeliki Papoulia). His failed attempts with the latter find him cast asunder into the woodland with the rest of the loners. It’s here that he meets Short Sighted Woman (Rachel Weisz) and forms an oddball relationship which goes against the “Logan’s Run” rulemaking set out by his newfound community. And that’s just the half of it.

Like something born from the mind of Charlie Kaufman by way of “The Mighty Boosh”, “The Lobster” is so delightfully unique and charming that a furrowed brow will quickly vanish. It establishes its rules from the off, however bonkers, and then asks the audience to go along for the ride. And for the most part you will.

Everything takes place in a wonderfully cold world, like a rundown “Grand Budapest Hotel” (the Wes Anderson vibe is prominent throughout) perfectly suited to housing its shuffling inhabitants, who exchange staccato dialogue, mostly for laughs, sometimes for pathos.

Of the vessels of loneliness, Farrell is great as the stupid smart David. A role seemingly built for someone like Paul Giamatti, the “True Detective” star quickly makes David’s skin his own, and the awkward tics and straight-talking warm you to his plight. Ben Whishaw errs on the right side of weird with his Limping Man routine, with his double-act with John C. Reilly providing some of the funnier sequences.

It’s not until the film’s patience-testing second half that we meet Weisz, who is also our straight-talking narrator. She manages to flicker with charm, despite the constraints put on her by the narrative rules. Her sign language conversation with Farrell is possibly one of the most weirdly romantic scenes of 2015.

“The Lobster’s” issues are all down to the running time. In particular there’s a jarring shift from the playful tongue-in-cheek antics of the hotel towards Lea Seydoux’s militant loner camp. Here the story comes to a bit of a stand-still, leaving unresolved threads from the first act. At a point when we’re meant to feel that this forbidden love could be could be good for our protagonists, it all gets a little dark, dull, and frustratingly ambiguous.

“The Lobster” might be a commentary on the human race’s inability to deal with their own isolation, constantly seeking validation through social media, or a desire to couple up and settle down like society dictates. One thing’s for sure, this’ll have you scratching your head as much as tickling your ribs.