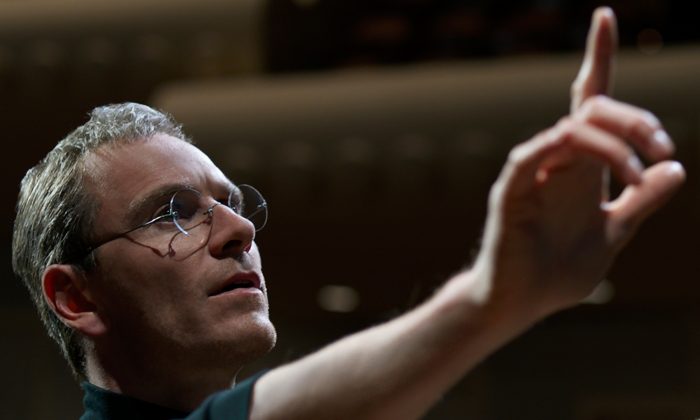 Steve Jobs was not a man given to humility. But in a rare moment of self-reflection during Michael Fassbender’s captivating interpretation, he admits to his estranged daughter, “I’m poorly made”.

Danny Boyle’s film is quite the opposite: surprisingly human for a movie focused on disconnection, “Steve Jobs” is a foot-stomping, hand-clapping triumph, only limited by your own desire to find out more than Aaron Sorkin’s clever script will allow.

This is a maelstrom of people and events, with Jobs orchestrating the chaos from the middle.

We start in 1984 and take in the backstage drama of three iconic product presentations up until 1998.

By Jobs’ side stands his “work wife” Joanna Hoffman (Kate Winslet), who panders to his every whim, but equally acts as his absent conscience. Jobs refuses to acknowledge his daughter, citing a ridiculous deduction that her mother (the superb Katherine Waterson) could have slept with 28% of the men in America.

He has to juggle conflicts with Seth Rogen’s Apple co-founder Steve Wozniak, who only seeks recognition for his money-making B-team, and his boss, John Sculley, who eventually ends up being the man who fires the turtleneck wearing perfectionist. Not to mention worrying that the Macintosh won’t say “hello” during its big launch, and that one of his designs is 1% offset from being a perfect cube. He was a complicated man.

Jobs is constantly walking a line between jerk and genius, excelling in both departments.

“Steve Jobs” is a film of rhythm and momentum, underpinned by Steve Pemberton’s complementary synths and beats score that has a way of making a conversation about DOS manifest as though it were an action set-piece. On the whole, though, it’s strangely lacking in Boyle’s usual visual panache. Underneath the surface, there’s so much going on that repeat viewing is a necessity.

Much of the controlled freneticism is down to Aaron Sorkin’s script. Whether it’s Michael Stuhlbarg’s weary tech explaining to a belligerent Jobs that, “I’m the person who can, and I can’t”, or the honest pathos of Hoffman telling her headstrong boss that, “You’re walking around like you’ve got ‘can’t lose’ cards”, every line is brilliantly written.

Refreshingly, this isn’t one of those Sorkin scripts that feels as though the words could be spoken by any number of characters and it not make a difference; here they define the characters.

In this deconstruction of a myth, everyone is afforded their moment in the spotlight, and the people surrounding our subject are just as important. As colleagues offering their friendships to a non-receptive man, Rogen and Winslet are great at trying to puncture his automaton exterior. Their frustrations echo yours, as Jobs is constantly walking a line between jerk and genius, excelling in both departments.

As the stage prowling showman, Fassbender is as intoxicating as Jobs must have been, immediately commanding your gaze for a two hour duration that doesn’t feel nearly long enough. He flits between arrogance, unintentional warmth, and genuine hilarity, even when he’s being to those that love him, all combining to make Jobs much more than the impersonation you get from similar biopics. There are so many clipreel moments, but his Beatles analogy stand-off with Rogen is full of the wit, sadness, and power that encompass the film as whole.

The decision to compose the movie as three acts is also a masterstroke. Shorn of a need for too much backstory or the sentimentality that could have accompanied depicting his tragic death, Sorkin and Boyle present this man at the peak of his powers. There’s only a couple of expertly edited flashback sequences, so we’re never far away from the propulsive immediacy of the behind-the-scenes, Birdman style rat-a-tat-tat of the film.

Much like its subject did with some of his less successful ventures, this might play hard and fast with the truth in favour of putting on a show, but who cares when it’s this good? iDon’t.