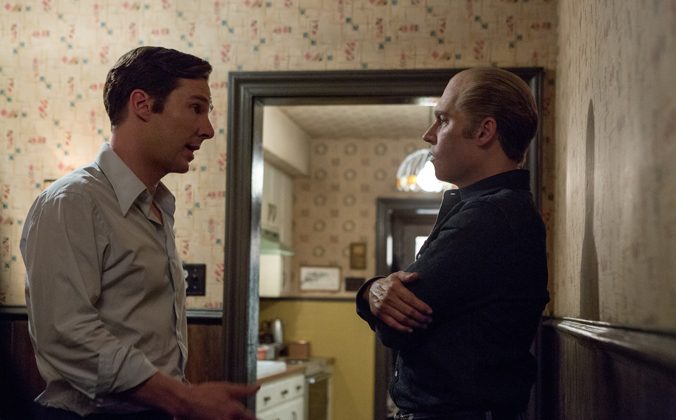 The movies have a habit of making the criminal underworld seem appealing, with its charismatic inhabitants idolised as men born into a life of racketeering and shallow graves.

Casting Johnny Depp as one of America’s most infamously violent gangsters might seem a bit of a gamble, then. Here’s an actor who’s had a string of high-profile flops playing larger-than-life characters covered in prosthetic make-up, being asked to play, well, essentially the same thing.

Scott “Crazy Heart” Cooper’s portrayal of the defining part of Jimmy “Whitey” Bulger’s south Boston legacy reigns in his lead actor, dials down the drama, filters the colour, presenting “Black Mass” as something of a drab, regimented, by-the-book account.

It’s fair to say that Jimmy Bulger had his connections, what with being brother to Billy, a politician (Benedict Cumberbatch), and childhood friends with a high ranking FBI officer, John Connolly (Joel Edgerton).

Indeed Connolly helped him evade conviction throughout his ascension to the top, mainly by becoming what was termed an “informant”, but something Bulger defined as “business”, and which in reality was just a cover to drip-feed red herrings to the law or stitch up rival gangs.

As with most crime related biopics, his activities put a tremendous strain on his personal life, especially girlfriend Lyndsey Cyr (Dakota Johnson) who’s worried about the influence his straight-talking life lessons will have on their son. Subsequent twin tragedies go some way to explaining the pale-eyed killer’s descent into further inhumanity and eventual arrest.

Despite the intriguing subject and detailed research that has gone into the screenplay, for most people “Black Mass” will only be about Johnny Depp’s performance. Whilst it is nowhere near Oscar worthy, his Bulger is a compelling watch, complementing the heavy fact-based drama. He never grandstands in the way poster boys for previous crime flicks have, but still hints at a psychotic force bubbling beneath the shaded glasses, especially in his treatment towards the few women in his life. It’s the least “Johnny Depp” he has been in a long time, reminding us that he’s a quality actor when he isn’t mucking about in a top hat with Tim Burton.

With Depp as the focus, the rest of the cast is a revolving door around him, as Cooper structures his film based on the numerous testimonies made by Bulger’s defecting gang members.

Up pops Jesse Plemons as his eager henchman, and then he vanishes, and then along comes Peter Sarsgaard as a shifty assassin, before he exits proceedings. You get the idea, and the same fate befalls Cumberbatch and Fanning, great in their respective parts, but lost in the shadow of Depp and the tangled web he weaves.

The only other real mainstay is Joel Edgerton’s corrupt agent, whose misplaced loyalty is played out like every other clichéd desperate cop on the other side of the law.

The most impressive aspect of “Black Mass” is Cooper’s minimal, meticulous, serious tone. It may leave some of the cast sidelined in favour of cramming in as much info as possible, but it does show how intelligently Bulger orchestrated his life. It might result in a serious lack of thrills or stand-out moments, but this means it errs towards something like “A Most Violent Year” in terms of an intellectual, grown-up narrative. And that can only be a good thing.