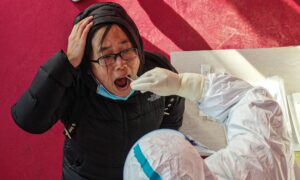 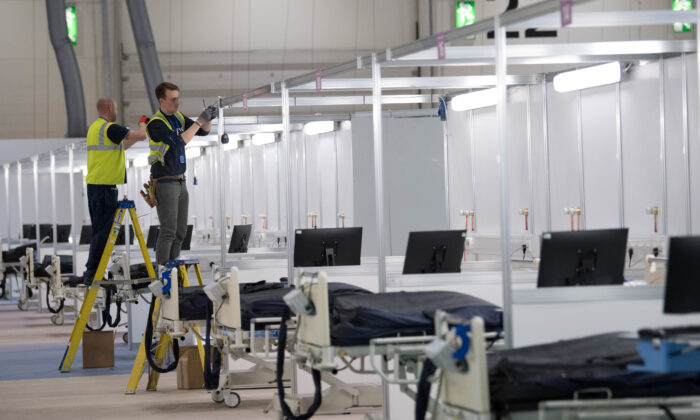 Work continues at ExCel London, during its conversion into the temporary NHS Nightingale Hospital, comprising of two wards, each of 2,000 people, to help tackle the CCP virus outbreak, in London, on March 31, 2020. (Stefan Rousseau/Pool via Reuters)
UK

A field hospital in London will be on standby in case the National Health Service (NHS) is overwhelmed, UK’s Health Secretary Matt Hancock said on Thursday, as London reportedly risks running out of beds within two weeks.

Projections leaked to the Health Service Journal suggested that even if the number of COVID-19 patients increased at the lowest rate considered likely, London hospitals would be short of nearly 2,000 acute and intensive beds by Jan. 19.

“We’re putting in the extra resources to make sure that the NHS gets the support it needs in the parts of the country where it’s under the most significant pressure,” he said.

“For instance in London, (we’re) making sure that the Nightingale hospital is on standby and there, if needed. And if it is needed, of course, then it will be used,” he added, referring to the first of the field hospitals built in London during the first outbreak of the CCP (Chinese Communist Party) virus pandemic for COVID-19 critical care. But it only treated 51 patients between April and May.

“Everyone was aware there were not enough highly skilled critical care staff to be moved out of hard pressed hospitals and maintain safe staffing ratios,” Nick Scriven, president of the Society for Acute Medicine, told medical journal The BMJ.

The BMJ on Tuesday said the hospital was to reopen to accommodate non-COVID-19 patients who are recovering from operations and procedures.

“We are working hard to prepare NHS Nightingale Hospital London to take patients if necessary,” a spokesperson for the NHS in London told The BMJ.

“It will provide rehabilitation for people who are recovering after an emergency hospital stay and who are not COVID positive, freeing up other beds in hospital for COVID patients,” the spokesperson said.

Chris Hopson, CEO at NHS Providers, a membership organisation for NHS trusts in England, said the NHS is facing a big challenge.

Hopson said the NHS trust had effectively doubled or tripled their critical care capacity to prepare for a CCP virus outbreak in winter, but some places are running out of beds.

When asked why the NHS doesn’t use the seven nightingale hospitals in England instead, Hopson said they are being used in Exeter and Manchester, but care and nursing home sector capacity is preferable because they already have staff in place.