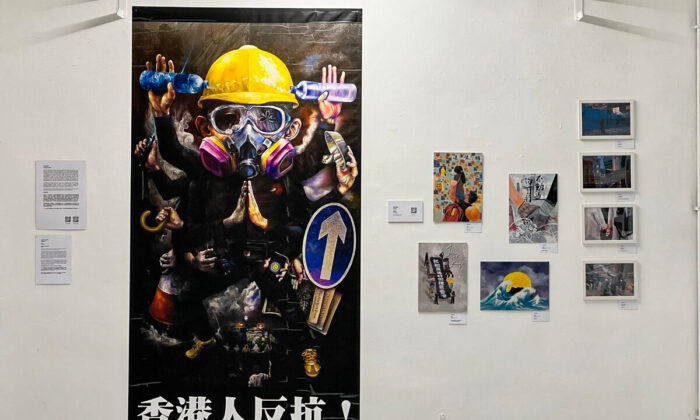 One grand painting "Thousand-handed Man"(千手人), by an artist couple, once displayed in Causeway Bay during the anti-extradition period, is in the exhibition now, albeit with traces of scratched paints when being removed at that time. (The Epoch Times UK)
Hong Kong

To commemorate the third anniversary of Hong Kong’s “6.12,” groups of Hongkongers in Britain, exiled protesters, and art workers held an exhibition in London on June 11-12, 2022, named “From Bricks to the World: The Awakening and Change of Hongkongers.” On display are about 100 works, by more than 10 artists, all related to the anti-extradition movement. A few hours after the opening of the exhibition on the first day, it had attracted hundreds of Hongkongers in the UK, as well as locals, to visit.

The exhibition was held at Apiary Studios near Cambridge Heath overground station in East London. On show were photos, videos, paintings, sculptures, which presented different aspects of the anti-extradition movement. Highlight of the exhibition is the 7-foot-tall Hong Kong Statue of Democracy with a brick array around its base. The exhibitor pointed out that “The reconstruction of the statue serves as a prop for an art documentary. There were two of them, but one was destroyed, and the current one symbolises “Rebuild after Destruction.” It is hoped that it will be shown around the world in the future.”

For the photo works, there are pictures of protesters stacking bricks on the road in 2019, the defence of the Chinese University of Hong Kong (CUHK), and the likes. There are also replicated works based on photos, such as the oil paintings that reproduce the scene of “Laser,” and also some imaginative creations, such as a painting titled “Winnie the Pooh to Tiananmen (小熊維尼到天安門)” which shows the lovely little bear raising the banner of “Recover Hong Kong, Revolution of Our Time (光復香港, 時代革命),” in Tiananmen Square.

There is also a giant painting, “Thousand-handed Man (千手人),” by an artist couple “Lam Ni Lam Long (淋漓淋浪),” in the exhibition hall. It shows people dancing, some holding umbrellas, steamed fish dishes, cameras, and international newspapers, symbolizing “harmony and courage.”   “Hongkongers resist!” is also printed on the work. The organiser added that “This painting was once displayed in Causeway Bay during the anti-extradition protest period. The one in the exhibition now has wrinkles, which are remains of the traces when the painting was removed at that time.”

The organiser also has reprints of many literature and propaganda pamphlets and slogans circulating on the Internet that year. Display panels detailing the relations and differences between Hong Kong, Britain, and China, as well as the ins and outs of the anti-extradition movement, were readily visible inside the exhibition hall.  At the entrance of the exhibition, there are quite a number of promotional cards shipped from Hong Kong, and printed with messages of anti-extradition and protest slogans for visitors to pick up.

The exhibition also displays a number of documentary film shots during the anti-extradition period. One of them lasts about 9 minutes and was shown in the projection room on the first floor of the exhibition. After attending the exhibition, Mr. Rogers, founder and executive director of “Hong Kong Watch,” said that “The most impressive thing was this video, because it started with the 1997 British farewell ceremony to Hong Kong and Chris Patten’s speech.” He also added that  “‘Hong Kong Watch’ will continue to speak for Hong Kong in the future, in the United Kingdom, Washington, and the United Nations.” There will also be activities on July 1, when the former governor of Hong Kong, Chris Patten, will be invited to give a speech.

In addition, outside the main venue, there is also a gallery corner in a street shop, where symbolic items of the 2019 protests are displayed. These include yellow umbrellas, brick formations, protesters’ clothes, canvases, and the like. Together with some loan items, all these works become the ‘bellwethers’ of the “Made from Scratch” movement in the UK. Catherine, who is one host of the exhibition, said ‘The gallery also attracted locals who didn’t know there was such an exhibition, and they also visited the main venue afterwards.”

She shared that “The organisers, including herself, and groups such as “Hong Kong Aid (港援),” and “Daredevil Team (攬炒團隊) ,” have absolutely no experience in organizing exhibitions. As the participating painters reside in different parts of the world, such as Hong Kong, Japan, and the United Kingdom, they also encountered a lot of challenges and bitterness in logistics, planning and communication.”

Another ‘Daredevil Team’ who organised the exhibition, LAU Cho Di, said that “In last year, he had tried to hold rallies and parades. He hoped that the exhibition would be a breakthrough from past activities, and not just limited to the people of Hong Kong.”  Lau believes that “The most basic element of “Free Hong Kong” is “preserving our identity,” so the history, culture and language of Hongkongers must be preserved.” He believes that “Through the help of different media for this exhibition, presenting what happened in Hong Kong will help preserve the history and identity of the people of Hong Kong.”