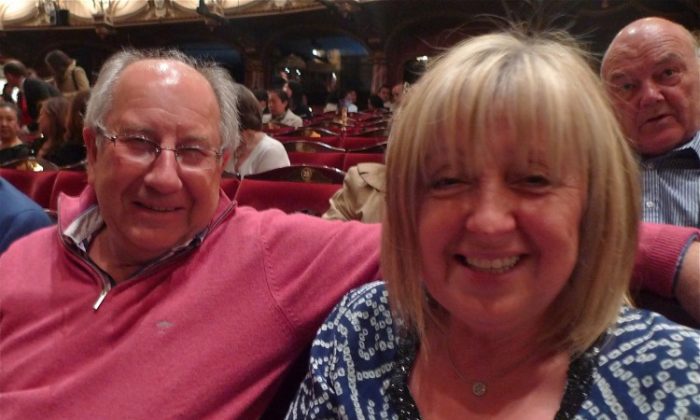 LONDON—Shen Yun Performing Arts wowed a packed audience at The London Coliseum on Thursday, Apr. 12, in the first of its five shows in London.

The New York-based Shen Yun Performing Arts returns to The London Coliseum for the second year running, on the final leg of the company’s European tour.

With a mission to revive 5,000 years of Chinese culture, Shen Yun’s colourful performance of classical Chinese dance and music was greeted with warm applause.

Mr. George particularly admired the choreography and the spirit of the dancers, who perform both perfectly synchronised dances as well as story-based dances highlighting traditional Chinese virtues.

“Can’t fault it really, the whole choreography has been so clever, and they’re all so passionate about what they do – really, really good to watch,” he said. “I was thinking how much they enjoy it; they just seem to be so passionate about it, [and] that comes across.”

Graham Smales, a civil engineer, and his daughter Debbie Smales, were also wowed by the synchronicity of the dancers.

“The dancing is terrific. They’ll all in perfect unison,” said Mr. Smales. “I can’t believe how they can do that, quite frankly. A lot of practice must go into it to get like that.”

Ms. Smales was delighted by the dancers’ costumes, which are all handmade and designed with inspiration from the different Chinese dynasties and ethnic groups, according to the Shen Yun Performing Arts website.

“The fabrics are beautiful,” Ms. Smales said. “The colours, the fabrics, the silks.”

Mr. Smales was impressed with how the dancers interact with the animated backdrop, which transports the audience to different regions of China and even to heavenly realms. “I like the background and how they come out of the background, very clever,” he said.

Film and television actor John Sarbutt was equally taken by this seemingly simple addition of modern technology. “I’ve never seen it before in my life, it’s very clever,” he said. “I think the costumes are wonderful, I think it’s all perfectly done.”

For Andrew Davison, who is semi-retired from the finance industry, the highlight of the show was the male dancers.

“I thoroughly enjoyed it; I think the dancers are amazingly athletic. It makes a very good show,” he said. “The male dancers are the most spectacular.”