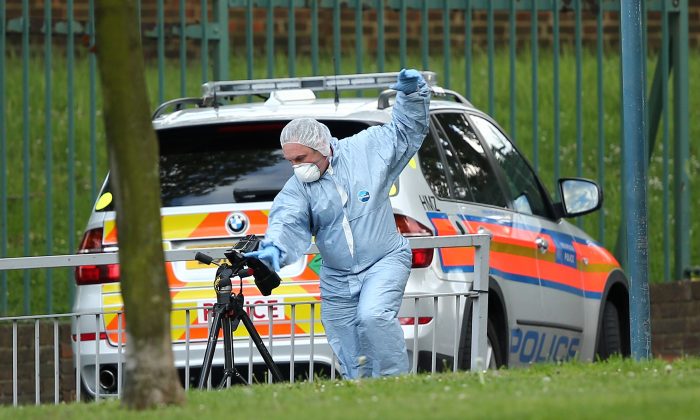 A forensic police offer photographs evidence at the scene where a soldier was butchered to death with a machete, in what officials are treating as a terrorist attack (Dan Kitwood/Getty Images)
Europe

Victim was in the military, it has emerged, as woman describes her conversation with blood-soaked attackers
By Simon Veazey

The man butchered to death on the streets of London on Wednesday was in the military, it has emerged, together with accounts of the extraordinary courage of a woman who tried to talk down the attackers.

Arriving at a meeting of the UK emergency committee (COBRA) on Thursday morning, London Mayor Boris Jonson praised the courage of the people of Woolwich where the man was hacked to death in broad daylight.

“People should take their cue from the behavior of people of Woolwich who showed such natural courage and stood up to those killers. That’s the spirit of London.”

Emerging from the meeting, he told reporters: “Everything I’m hearing reassures me that Londoners can go about their business in the normal way and we’re going to bring the killers to justice.”

The victim of the machete attack, wearing a T-shirt from a military related charity, was in the military, sources have confirmed, according to the BBC.

The two attackers did not flee the scene of the crime, but instead appeared to stay for around 10 minutes, asking people to take their photographs and film them. When armed police arrived, they ran towards them, and were shot.

Photographs show a woman talking to one of the attackers. Her name was Ingrid Loyau-Kennett a Cub Scout leader from Cornwall.

“Being a Cub leader I have my first aid so when I saw this guy on the floor I thought it was an accident – then I saw the guy was dead and I could not feel any pulse,” she told the Telegraph.

“And then when I went up there was this black guy with a revolver and a kitchen knife, he had what looked like butcher’s tools and he had a little axe, to cut the bones, and two large knives, and he said, ‘Move off the body’.

“So I thought, ‘OK, I don’t know what is going on here’, and he was covered with blood. I thought I had better start talking to him before he starts attacking somebody else. I thought these people usually have a message so I said, ‘What do you want?’

“I was not scared because he was not drunk, he was not on drugs. He was normal. I could speak to him and he wanted to speak and that’s what we did,” she told the Guardian.

“He said he had killed the man because he [the victim] was a British soldier who killed Muslim women and children in Iraq and Afghanistan. He was furious about the British army being over there.

“At that point, there were so many people around that I didn’t want him to get scared or agitated. I kept talking to him to keep him occupied.

“I am just happy that I managed to do something that might have prevented more trouble. I feel fine at the moment but I suppose the shock could hit me later.”

Other eyewitness reports tell of women trying to protect the victim’s body. Video footage shows that people did flee the scene.

According to witnesses the attackers shouted “Allah is greatest” as they butchered the man.

Video footage from the scene shows one of the attackers, clutching a machete and a knife in blood-stained hands, come up to the camera and talk in a London accent.

“We swear by almighty Allah we will never stop fighting you. The only reasons we have done this is because Muslims are dying every day. This British soldier is an eye for an eye, a tooth for tooth,” he says in the video, obtained by ITV.

“We must fight them. I apologise that women had to witness this today, but in our land our women have to see the same. You people will never be safe. Remove your government. They don’t care about you.”

The overall picture fits with recent warnings from security services who said  radicalised “lone wolves” with no connections to al Qaeda, posed as great a risk as the more organised cells like those behind the 2005 bombing that killed 52 people in central London.

The attacks have prompted some backlash against the Islamic community. According to the BBC a man was arrested for suspected of attempted arson after reportedly walking into a mosque holding a knife in Essex, according to the BBC.

Around 250 supporters of the English Defence League gathered in Woolwich where they clashed with police.

The Muslim Council of Great Britain called for calm in a statement.

“This action will no doubt heighten tensions on the streets of the United Kingdom,” they said.