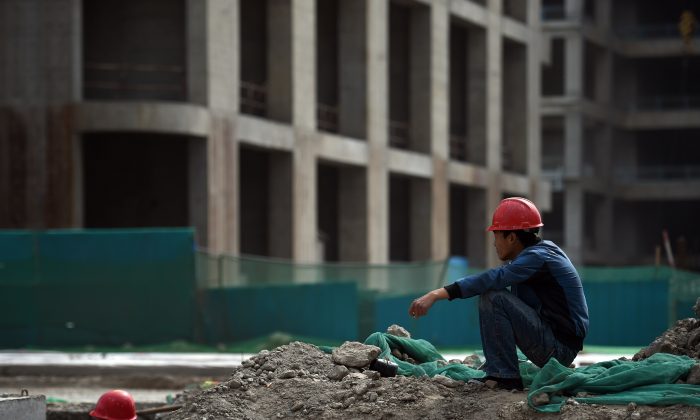 This photo taken on May 14, 2015 shows a construction worker resting near a building in the new Yujiapu financial district, in Tianjin, in northern China. The massive government project, sometimes described as China's answer to Manhattan, incorporates dozens of skyscrapers and is being built in the hope of becoming one of the world's largest financial centers. But a slowdown in growth in China's economy has raised doubts about the viability of such large scale projects, and some reports have described the district as a "ghost town". (Greg Baker/AFP/Getty Images)
Business

Diana Choyleva has covered China for Lombard Street Research pretty much since she left university more than a decade ago. Lombard had successfully predicted the Asian financial crisis in the late ’90s and she personally foresaw China’s rise to a dominant global player at the start of the last decade. By the end of it, however, she argued China had come to the end of its export-led growth model, forecasting growth to average just 5 percent a year in this decade. In the meantime, she also co-authored this book: “The American Phoenix: And Why China and Europe Will Struggle After the Coming Slump.”

Right now, the head of research and chief economist of Lombard continues to be cautious about growth, but still believes China has the means and tools to manage its debt problem.

Epoch Times: Ms. Choyleva, what are the most pertinent issues on your radar regarding China?

Diana Choyleva: China’s growth has slowed down dramatically. Our estimate suggests that quarterly annualized growth averaged just 6 percent this decade and below 5 percent for 2014. For the first quarter of 2015, we calculate a quarterly contraction.

Epoch Times: How can the regime respond?

Ms. Choyleva: Currently the weakness is much more pervasive than after the financial crisis as domestic demand has collapsed. But the authorities have now realized that they cannot just throw money at growth anymore. They need to reform.

But Beijing hasn’t been fully tested yet as to how much pain they can take. This year will be crucial to see whether the leadership will actually stick to their reform plan.

They are walking a fine line between allowing weakness in the economy while doing reform. They want to avoid an economic collapse. It’s not difficult to see how they might be unsuccessful managing this adjustment.

Epoch Times: How can they address the debt problem without choking the economy?

Ms. Choyleva: They need to clean up the mess of the past. During the past banking crisis of the mid 1990s they swept the problems under the carpet. The expectation when they started this was that the bad debt would be written off.

But the bonds [issued by wealth management companies] stayed on the banks’ balance sheets. In 2011, they were still 30 percent of banks’ capital. Then in 2012 the Ministry of Finance bought a lot of those bonds at face value and now they are on the [regime]’s balance sheet.

Epoch Times: What about now?

Ms. Choyleva: It’s clear that any cleanup would ultimately mean accepting a loss. It will be important to see if the banks will bear some of the cost, or whether the authorities will again remove the bad loans at face value.

No one really knows the true value of bad debt in China. But to see if the authorities can afford the cleanup let’s assume a very drastic scenario of 50 percent of household and net corporate loans being bad and zero money can be recovered.

Then, if the government has to take the bad loans on its balance sheet as a one-off increase of their debt, gross government debt will increase to over 110 percent of GDP. It’s a big jump, but Japan managed to sustain higher levels for a long time, despite growing at much lower rates.

Epoch Times: But there has to be a consequence.

Ms. Choyleva: What is too late for them to do is rebalance the economy and expect strong growth. The cleanup of past excesses will involve low growth, financial distress, and painful economic adjustment. But if they forget about reform and throw money at the economy again, then they will have a financial crisis within the next couple of years.

I doubt this is going to be a black and white story. For the moment they are trying to support the economy to an extent, but move along with reforms.

If they don’t try to smooth the adjustment the blow to the economy could be devastating. I would expect the authorities will try to do as much cleansing as they can and at the same time try to prevent the economy from collapsing.

Monetary conditions are very tight despite some easing. Broad money growth continues to decelerate, rather than explode like it did within a few months of them starting to ease in 2008. I think they are trying to balance and muddle through but it’s an extremely difficult adjustment.

Epoch Times: What about China’s recent bid to be included in the IMF world reserve currency (SDR)?

Ms. Choyleva: One of the reasons why they want to enter the basket is that they have now exhausted the banking system as the source of funds for their fiscal expansion.

They need to start borrowing more from the nonbank public. Allowing local governments to issue municipal bonds is part of this plan.

If they borrow internally, it might be easier for them but they might want to have the possibility to borrow at affordable rates externally as well. Right now they have hardly any borrowing from abroad.

To do that, they would need to have a strong credit rating and credibility. And going into the IMF’s SDR is one way of achieving that. The next stage of China’s development will invariably involve increasing official government debt.