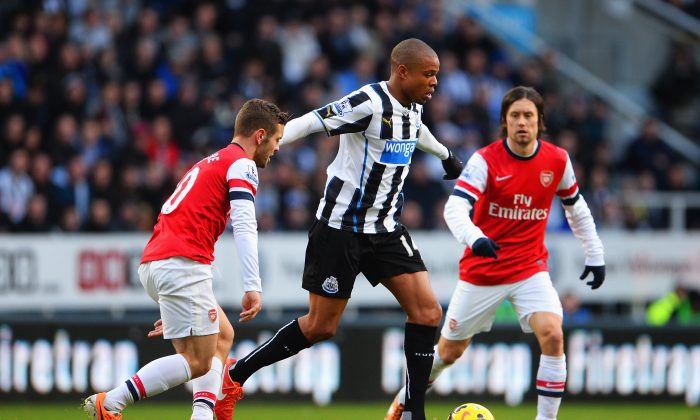 Loic Remy of Newcastle United is closed down by Jack Wilshere (L) and Tomas Rosicky of Arsenal during the Barclays Premier League match between Newcastle United and Arsenal at St James' Park on December 29, 2013 in Newcastle upon Tyne, England. (Michael Regan/Getty Images)
Soccer

Loïc Rémy’s fate is up in the air, as he is on loan to Newcastle. But Alan Pardew wants Rémy to stay with Newcastle for the long term.

“He has been terrific, he is a lovely young boy,” Pardew told Absolute Radio. “I think he has got great technical ability, and he is going to have a great career in the Premier League for sure.”

Pardew said the team will look at its finances and decide whether to sign Pardew at the end of the year. “We have the finance to do that,” he said. “Loïc and his agent and his representatives will decide where his future is.”

But Pardew added that “50,000 Georgies” cannot be matched by many clubs. “That’s what I say to my players.”

“They think the grass is greener, and we have lost some good players in this football club,” he said. “Joey Barton moved on, Andy Carroll, and actually you have to argue, have they moved onto better clubs? Because when they were here they were absolutely terrific for us, and I think sometimes the grass isn’t always greener as we know.”

Rémy scored twice this past week in the Boxing Day match against stoke, reported Africa Top Sports. The blog speculates that the star player could end up at Arsenal.