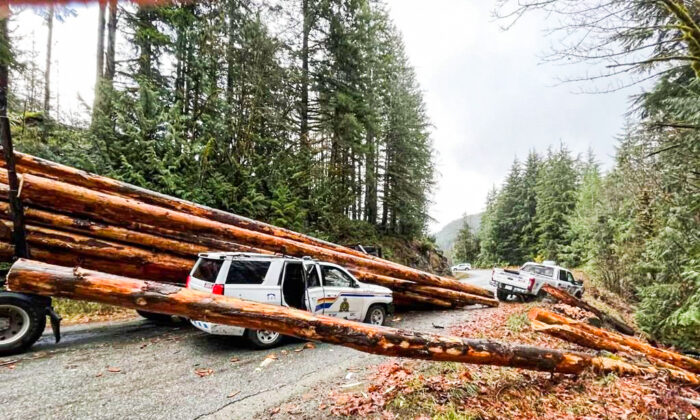 A Royal Canadian Mounted Police vehicle is shown following an accident with a logging truck near the Fairy Creek Watershed area on Vancouver Island, B.C. in this Tuesday, Nov. 9, 2021 handout photo. THE CANADIAN PRESS/HO - RCMP
Canada

The RCMP say the officers were driving along a logging road near Port Renfrew, where they were heading to enforce a court injunction against blockades set up to protest old-growth logging.

Police say in a release that as the RCMP vehicles rounded a corner, a logging truck travelling in the opposite direction struck the first vehicle, dislodging its load of logs, which then hit the second police SUV.

The Mounties say three officers were taken to hospital for assessment and their injuries are believed to be non-life-threatening.

Sgt. Chris Manseau says commercial vehicle safety and enforcement officials and a collision analyst will conduct an investigation under the Motor Vehicle Act.

A portion of the logging road was closed Tuesday in both directions while the investigation was underway.