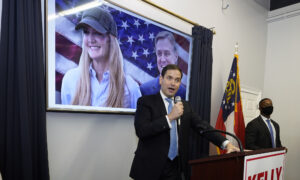 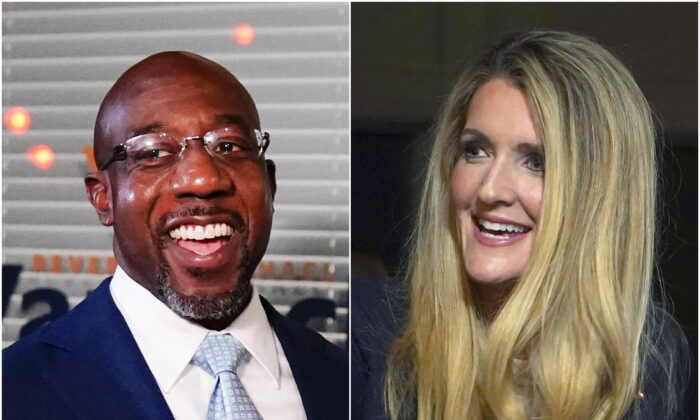 Loeffler to Debate Warnock in Georgia US Senate Runoff

“I would welcome another chance to debate Raphael Warnock,” Loeffler said Monday night during a virtual appearance on Fox News’ “Ingraham Angle.”

Loeffler and Warnock participated in a debate earlier this year before they emerged from a so-called jungle race in a special election triggered by the retirement of Sen. Johnny Isakson (R-Ga.).

“I had the opportunity in that debate to show how radical his agenda is,” Loeffler said.

The businesswoman was appointed to replace Isakson by Georgia Gov. Brian Kemp, a Republican, and took office in January.

“I’ve hit the ground running, delivered for Georgians during the pandemic to bring relief, and also holding people accountable like Raphael Warnock for their comments, supporting, you know, folks like Fidel Castro, inviting them into his church, and at the same time criticizing police officers. So Georgians need to know who he is. And I welcome that chance to debate him as many times as he wants,” Loeffler added.

The Atlanta Press Club is hosting two debates on Dec. 6. One will feature Loeffler and Warnock while the other will have Democratic Senate nominee Jon Ossoff and an empty podium after Perdue said he would not appear.

Warnock’s church in 1995 invited Cuban dictator Fidel Castro to speak while Castro was in the United States for a United Nations summit.

Warnock wouldn’t answer directly when asked if attended the speech during a virtual appearance on CNN’s “State of the Union” on Sunday.

“I understand why Kelly Loeffler is trying to change the subject. I was a youth pastor. I had nothing to do with that program. I did not make any decisions regarding the program. I have never met the Cuban dictator. And so I’m not connected to him,” Warnock said.

Warnock championed his personal history, saying he grew up in public housing and was the first graduate from a four-year college in his family.

“I know personally the importance of good federal policy, combined with personal responsibility, work, grit, and determination. That is the reason I’m able to run for the United States Senate. I am an iteration of the American dream. And I’m running for the Senate because that promise is slipping away from far too many people. That is what this race is about,” he said.

The races are attracting scores of outside spending because the winners will likely control the Senate.

Current projections have Republicans with 50 seats in the next Congress, versus 48 for Democrats.

If Democrats win both Georgia runoffs and the presidency, they’ll control the Senate via the tiebreaking vote a vice president can cast in his or her role as president of the body.

If Republicans win just one, they’ll maintain control of the Senate for the third consecutive two-year period.

Vice President Mike Pence will travel to Georgia on Friday to campaign and, according to a top aide, Democratic presidential candidate Joe Biden will likely go to the state down the road.

The runoffs were triggered because none of the candidates received a majority of the vote.

But many of the approximately 979,000 voters who chose Rep. Doug Collins (R-Ga.) in that election will likely shift to Loeffler, making her a favorite to keep the seat.

Whomever wins that runoff will be in office until January 2023.

Perdue beat Ossoff by over 86,000 votes. The winner of their head-to-head will be in office for six years.