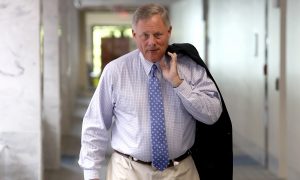 Sen. Kelly Loeffler (R-Ga.), the most recent addition to the Senate, sent documents and other information pertaining to the sales of stocks made earlier this year, while Sen. Dianne Feinstein (D-Calif.) said she answered questions from the FBI over stock sales.

The senators were among those who disclosed stock sales in the early weeks of what ultimately became the COVID-19 pandemic.

Some of the senators received closed-door briefings on the developing situation, causing concern they used information they received to dump stocks in companies they believed wouldn’t fare well when the Chinese Communist Party (CCP) virus spread widely.

Loeffler, who disclosed nearly $20 million in transactions completed in the first quarter, forwarded “documents and information” to the Department of Justice, the Securities and Exchange Commission, and the Senate Ethics Committee, a spokesperson said in a statement sent to news outlets this week.

The documents show that both the senator and her husband “acted entirely appropriately and observed both the letter and the spirit of the law” and that her husband Jeff Sprecher, the CEO of a company that owns the New York Stock Exchange, wasn’t involved in the accounts from which the sales were made, the spokesperson said.

Loeffler said last month that investment decisions are made by third-party advisers and she wasn’t told of the sales and purchases until weeks after they were made.

Facing increasing criticism after reporting nearly $1.5 million in sales from March, Loeffler said early last month that she would liquidate her stocks.

A spokesperson for Feinstein, meanwhile, told reporters in Washington that the senator answered questions from law enforcement about sales her husband made in January and February.

“Senator Feinstein was asked some basic questions by law enforcement about her husband’s stock transactions, as I think all offices in the initial story were,” the spokesman told news outlets.

There’s been no follow-up action, as far as Feinstein knows.

Feinstein has been in office since 1992. The oldest member of Congress, she sold between $1.5 million and $6 million in stock from a California biotech company called Allogene Therapeutics between Jan. 31 and Feb. 18, according to disclosure forms.

Feinstein described her assets as being in a blind trust but also said her husband, investment banker Richard Blum, sold the Allogene shares.

“Under Senate rules I report my husband’s financial transactions. I have no input into his decisions. My husband in January and February sold shares of a cancer therapy company. This company is unrelated to any work on the coronavirus and the sale was unrelated to the situation,” she said in a statement.

Feinstein, the ranking member on the Senate Judiciary Committee and a member of the Senate Intelligence Committee, has kept her posts even as Sen. Richard Burr (R-N.C.) stepped down as chairman of the latter committee.

While most senators attributed stock sales to other people, Burr said he himself made the sales, though he said there was nothing wrong with what he did.

Burr said in a statement that he “relied solely on public reporting to guide my decision to sell the stock,” including reports from CNBC’s Asia bureaus.

Burr said he welcomed an independent review from the Senate Ethics Committee.

The chairman and ranking member of that committee haven’t announced investigations into any of the senators who disclosed stock sales. A staffer told The Epoch Times that confidentiality rules prevent lawmakers from discussing the matter.