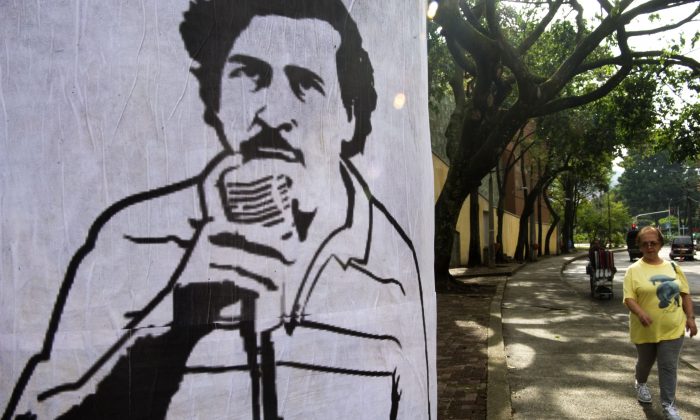 A woman passes by a poster with the image of deceased Colombian drug lord Pablo Escobar along a street of Medellin, Antioquia department, Colombia, on March 21, 2012. On Sept. 18, 2013, Merco Press published an article about Colombia's refusal to trademark Escobar's name for instructive and recreational purposes; Escobar t-shirts have also become popular in the United States. (Raul Arboleda/AFP/Getty Images)
US

MIAMI BEACH, Fla.—A locked safe has been found in the debris of a Miami Beach mansion once owned by Colombian drug lord Pablo Escobar.

Excavator operator Miguel Mato tells El Nuevo Herald that the 2-foot-by-2-foot safe weighs up to 700 pounds. Mato says he noticed it when the floor sank beneath some rubble.

De Berdouare and his wife say the safe will remain locked in a bank vault until they finish filming a documentary about Escobar’s link to the property.

U.S. authorities seized the property in 1987.