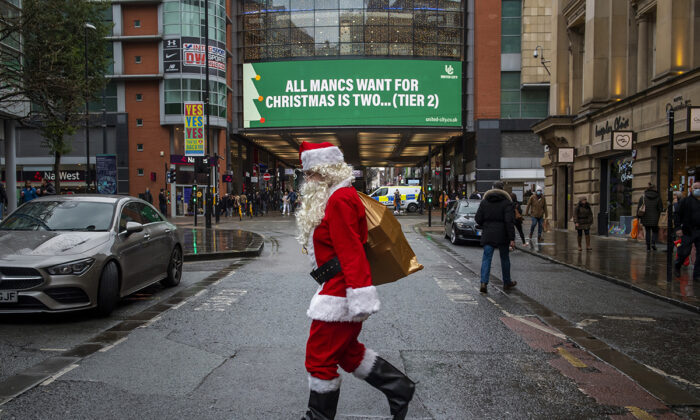 Lockdowns “never ultimately prevent infection” and only serve to flatten the curve and thereby prolong the epidemic, a British medical professor has warned.

Paul Hunter, professor in medicine at the University of East Anglia, said on Dec. 21 that there is no need for a lockdown in the UK as the increase in COVID-19 cases appears to be slowing.

He told the PA news agency that measures such as social distancing and lockdowns “never ultimately prevent infection unless eradication is a possibility.”

“What they do is flatten the curve and delay the inevitable,” he said. “Sometimes that is sufficient if the epidemic would overwhelm the health service, or if effective new treatments or vaccines are coming.

“No new treatments or vaccines are likely to come soon, so the issue is all about flattening the peak. But if you flatten the peak you prolong the epidemic, or as we say, ‘the area under the curve remains the same.’”

“If restrictions are not needed, then they would only delay illness and prolong the impact on health services as well as the other negative impacts that lockdowns have on our well-being.”

According to Hunter, the latest data show that total case numbers, including those of the Omicron variant, may already have plateaued or even peaked. “Indeed, infection numbers may have fallen slightly in the last few days.”

Hunter told Times Radio that the previously rapid increase of Omicron cases “may have slowed quite dramatically.”

“If that is the case, then there probably isn’t a need for a lockdown,” he said.

The UK government removed most of England’s lockdown measures in July, but it has tightened pandemic-related restrictions again following the detection of the Omicron variant.

Under the government’s “Plan B” measures, people have been asked to work from home if they can, vaccine passports have been introduced for large-scale events and nightclubs, and a mask mandate has been enforced for most indoor settings, including cinemas and theatres.

Over the weekend, members of the government’s Scientific Advisory Group for Emergencies recommended more restrictions.

Professor Carl Heneghan, director of the Centre of Evidence-Based Medicine at Oxford University, warned on Dec. 20 that government ministers have been focusing on worst-case scenarios in COVID-19 modelling and the UK is at serious risk of “talking ourselves into annual lockdowns.”

On Dec. 20, after a special two-hour meeting of the Cabinet, Prime Minister Boris Johnson said the government would keep the data under constant review “hour by hour,” but didn’t implement further restrictions beyond Plan B.

He said his government wouldn’t impose additional measures before it gets a clearer idea about the rate of hospital admissions associated with Omicron, and the effectiveness of vaccines against it.